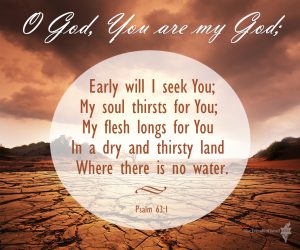 Life in the wilderness is not easy, especially  living as a fugitive running from your enemy. David’s enemies did all they could to hunt him down, even waiting for him in all the known places in the desert where there is water and food. So David was forced to hide in the driest, most  barren places.

While being in his hopeless situation, deprived from all basic needs to sustain life, David said that his hunger and thirst for God was greater than his hunger for food and water.

We all know the great importance of real food and water to our body, but the best food and the purest water do not produce the tranquility, safety, peace, and fellowship that can only be found in God’s presence. Even through time of dire situations, David did not complain against God, but openly and loudly he declared that Yahweh is his Lord and that he seeks Him all the time, even from the beginning of each day.

“Early will I seek You…“

The Hebrew word is Ashachareka (אשחרך), which means “to seek diligently,” derives from the word Shachar (שחר) which in Hebrew means “dawn.” David is saying that he seeks God early in the beginning of each day. It was the first thing he did after he woke up. The first thing David was hungry for was – God!

All David had in mind was not to enjoy the benefits of being a powerful king, but to be present in the house of the Lord and to enjoy the presence of God. There he saw the service of the Lord, which was  the ministry of the priests. He heard the reading of the Word of God and had a constant reminder of God’s holiness and sovereignty in handling his nation throughout the generations.

There in God’s house (then in Shiloh), he had a daily reminder of God’s plan of salvation, which would be paid by the highest price of His servant, His only Son, the Messiah, for the benefit of sinful mankind.

When David mentions the words grace of God, he means all the things God provides to His beloved which they do not deserve.

A graceless life is characterized by the lack of fellowship, loneliness, sickness, loss, sorrow, and pain.

A life full of grace is only measured with God’s presence and the ability to internalize God’s plan and work in this world. It allows the saved child of God to see the events in this world through God’s eyes. Therefore, God’s grace provides peace, security, healthy fellowship and eternal life with God.

Due to David’s saving faith and experience with God, he says that the grace or lovingkindness of God is better than life, therefore his lips always praise God. For the same reason he said in Psalm 27:4: “One thing I have desired of the LORD, that will I seek: that I may dwell in the house of the LORD all the days of my life, to behold the beauty of the LORD, and to inquire in His temple.”

Psalm 63 was written in time of serious war and hardship for David. Though we are not all at war, we all experience challenges that shake our lives and test our faith. It’s in such time we should remember that the grace of God that was given to us through the atoning blood of Christ Jesus, which is greater and more important than any earthly event and challenge.

To seek God early each day, a person must experience an intimate and personal relationship with God. David knew God. Therefore he knew that the Lord Himself is better than food and life.

What is your desire early each morning? 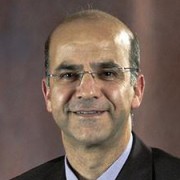