Hanukkah
THE FESTIVAL OF LIGHTS

While not a holiday commanded by God, Jesus observed Hanukkah or The Feast of Dedication in John 10 during his first coming.

Now it was the Feast of Dedication in Jerusalem, and it was winter. And Jesus walked in the temple, in Solomon’s porch.   (John 10:22-23)

In 168 BC in a small town in ancient Israel, the age-old battle between spiritual compromise and godly character waged. The events which took place resulted in one of Israel’s most widely observed holidays, the winter festival of Hanukkah, or the Festival of Lights. 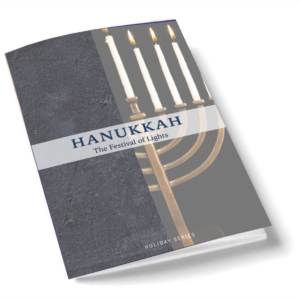 This article is one of the pamphlets in our Holiday Series set. You can download it for free or purchase the entire set.

Hanukkah (lit., “Dedication”) commemorates the Jewish people’s great military and spiritual achievement during the reign of Seleucid ruler Antiochus IV (or Epiphanes [God Manifest], as he dubbed himself).

Antiochus severely persecuted the Jewish people and forbade them from observing God’s commandments. He even set up an image of Zeus on the bronze altar in the Temple in Jerusalem and there sacrificed a pig.

Though many Jewish people chose to compromise to save their lives, an aged Jewish priest named Mattathias and his five sons were among those who refused to cave. Mattathias’ son Judah Maccabeus led an army to fight Antiochus’ troops. Facing overwhelming odds, Judah and his men became seasoned warriors.

On the 25th day of Kislev, 165 BC, exactly three years to the day that Antiochus desecrated the Temple, Judah and his troops re-dedicated the Temple in Jerusalem and consecrated it to God. They constructed a new Temple lampstand, a new table of showbread, a new altar of incense, new curtains, and new doors. They also tore down the old altar of burnt offering and replaced it with a new one.

The people of Israel celebrated for eight days. Judah decreed that such a festival should be observed every year to memorialize the “restoration of their Temple worship.”1

Some posit the reason the Maccabees chose to fix the duration of Hanukkah at eight days was because when the Maccabees found only one cruse of consecrated oil with which to light the menorah at the Temple, the oil miraculously lasted for eight days. But since this story is not found in the event’s earliest manuscripts, the miracle of the oil story is probably fictitious.

Regardless, the real miracle of the story is how God protected His people and delivered them from their evil oppressors.

OBSERVANCE OF HANUKKAH
Beginning on the 25th day of the Jewish month of Kislev (November-December), Hanukkah is observed for eight days. It is a joyous time of food, family gatherings, and activities for the children.

Jewish families begin the holiday by lighting the Hanukkah menorah, or hanukkiyah, which has nine candlesticks. One candle is added each evening; and the ninth candle, called the shammash (servant), is used to light the other eight.

HANUKKAH AND CHRISTMAS
Biblical Christians believe without Hanukkah, there could be no Christmas. If God had not preserved the Jewish people during the events surrounding Hanukkah, then Jesus would not have been born, nor could He have affirmed His Messianic credentials.

Jesus chose Hanukkah as the occasion to make His startling claim: “I and My Father are one” (Jn. 10:22–30). His statement affirmed the truth there is only one God, but that God exists as one being in three Persons: the Father, the Son, and the Holy Spirit (Isa. 48:12–16).

How could He make such a claim? The answer is found in the empty tomb. Antiochus IV claimed to be God. So did Jesus. But while Antiochus IV remains dead, Jesus the Messiah is alive.

THE FRIENDS OF ISRAEL BLOG
What Night Is This?
A spirit of excitement fills the house as happy children anticipate the gifts they have eagerly awaited. After dinner father gathers the family around him to retell the old, old, story...

THE FRIENDS OF ISRAEL TODAY RADIO
Jesus Celebrated Hanukkah
We celebrate holidays like Christmas and Easter. However, during the days of Jesus, there was no Christmas and there was no Easter. Jesus worshipped the Father through the Jewish festivals...

ISRAEL MY GLORY MAGAZINE
Hanukkah in Israel
On December 16, Jewish people around the world will light the first candle in the eight-day celebration of Hanukkah. This joyous holiday commemorates the cleansing of the…

ISRAEL MY GLORY MAGAZINE
A Hanukkah Menorah
The menorah is the very heart of the Jewish holiday of Hanukkah. Here is a true story about a treasured menorah whose light will shine brightly this holiday season.

ISRAEL MY GLORY MAGAZINE
Hanukkah: A Story of Courage
It’s rarely easy being Jewish. From the time the Babylonians destroyed Solomon’s Temple in 586 B.C., the Jewish people have been under Gentile domination. Even today every country on Earth thinks it has…

ISRAEL MY GLORY MAGAZINE
Happy Hanukkah
On December 15, as it grows dark, our family will gather around the dinner table to light the first candle on a nine-armed candelabra and sing Maoz Tzur Yeshuati: “The Strength of My Rock…

ISRAEL MY GLORY MAGAZINE
The Joy of Hanukkah
Potato latkes, sufganiyot (Hebrew for jelly donuts), special songs, special food, and special times with family and friends are all part of the eight-day celebration of Hanukkah, a festival that commemorates the Jewish victory over…