“Grandpa, have you ever heard of the name ‘Plantz’ being Jewish?”

“Yes, I have!” my Grandpa Ralph replied.

“When did you learn that?”

“My grandmother told me, when I was an orphan in Minneapolis.”

“Because we are Jews!”

“How come you never told anybody before this?”

“Because no one ever asked this before!”

“Who would have ever asked a question like that?”

I was 36 years old when I had this conversation with my Grandpa Ralph Plantz in August of 1992.

I had recently returned from Israel where I had lived on a moshav at Gilat for eight weeks. While there I studied archaeology at the Hebrew Union College, and I had the privilege of walking and absorbing the Land of Israel from one end to the other. It was here in Israel that the name Plantz was found in the Jewish records. I learned that it was a Hungarian name, and that people by this name moved to the Netherlands and from there, in 1752 to Albany Bush, New York.

Let’s back up a bit and fill in some details as to how this all came about.

A Calling to the Holy Land

I was born in Winnipeg, MB, Canada to Gomer and Dorothy Plantz on October 13, 1956, and three years later we moved 100 miles north to the town of Camper.

Camper is the location of the former New Hirsch Colony, a Jewish farming colony set up by the Jewish Colonization Association. I recall a day in grade 5 while attending the New Hirsch School when my teacher displayed a large map of the world and began to point out various countries and what they were known for. I noticed the word Israel appeared to be in the middle of the Mediterranean Sea. I asked her about that word, and she replied, “It is the country of Israel, and you don’t need to know anything about it.” I went home that day and told my mom, “Someday I will be going to Israel!”

After attending the New Hirsch school, I went to Ashern Collegiate and graduated from there. I went to work on bridge construction in Wawanesa, MB, but I was looking for further education. A friend of mine recommended Briercrest College at Caronport, Saskatchewan (SK) because it had and still has an excellent sports program. I applied and was accepted, somewhat oblivious to the fact that it was a Bible college. During my time here, I found the Bible becoming more and more fascinating, and on December 14, 1976, I accepted Jesus as my Lord and Savior. This only increased my interest in the Land of Israel.

I remember at the wedding reception, apropos to nothing, I suddenly leaned over to her and said, “One day I’m going to Israel.”

In 1979 I graduated with a Bachelor of Religious Education degree and a teaching certificate. In 1983, I married my wife, Irene. I remember at the wedding reception, apropos to nothing, I suddenly leaned over to her and said, “One day I’m going to Israel.” It was important to me for her to know this on our most important day.

From 1978 to 1988 I worked as a youth pastor and as a circuit preacher in northern Manitoba and Saskatchewan. In 1989 I decided to go back to Briercrest Seminary to obtain a Master of Ministry degree with studies in archaeology in Israel.

As I studied the Bible more intently, one of my professors suggested that if I really wanted to understand the Bible better, it would be good to hear it from a Jewish perspective. So in September 1991 I was off to the Beth Jacob Synagogue in Regina, SK. One day after a Shabbat service, the rabbi asked if I was Jewish, for he had a Jewish friend with the same last name as mine. I told the rabbi that I was planning to visit Israel and that I would pursue this thought when I was in Jerusalem.

In April 1992 I joined The Friends of Israel Gospel Ministry in Canada, which allowed my great desire to visit the Holy Land come true. I went to Israel that summer to study archaeology and work on excavations for several months. After my time in Israel, we moved to Winnipeg in August 1992. It was then that I had the conversation with my Grandpa Ralph that answered the question of my Jewish roots.

Winnipeg offered me the chance to immerse myself in the Jewish community. I served as a librarian at a Jewish public library where I organized and cataloged the Yiddish collection and interacted with rabbis and other well-respected Jewish Canadians. Since then I have been serving God with my family through The Friends of Israel, teaching the truth of His Word to those He has put in my life and supporting our Jewish community.

The Lord has blessed us with six children, five of whom are married, and six grandchildren.

I am pleased to say that our sons studied Yiddish and our daughter took Hebrew at the Jewish Library. They all grew up watching Rechov Sumsum (Sesame Street in Israel)!

From an early age I was drawn to the land of Israel. I’m Jewish, and I believe in the Jewish Messiah, Yeshua. I believe in living my life with kindness, integrity, and respect for all, always keeping the words of Micah 6:8 in mind: “And what does the Lᴏʀᴅ require of you? To act justly and to love mercy and to walk humbly with your God.” 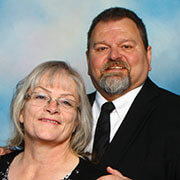 John Plantz is the Church & Field Ministries Director in Winnipeg, Manitoba, Canada. You can support his ministry online here.