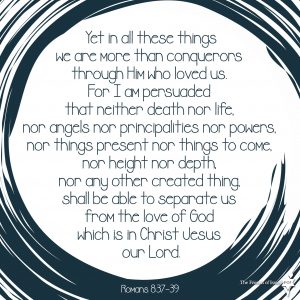 There was a battle on the court a few years ago. The Memphis Grizzlies and the Sacramento  Kings were both playing great basketball,  fighting back and forth for the big win. Then the Grizzlies made a shot that surely gave them the game, affording them a one-point advantage over the Kings: Grizzlies 98 and the Kings 97, with only 1.5 seconds on the clock. The crowd definitely thought the game was over.

That’s when Tyreke Evans wasted no time with only 1.5 seconds left, he fought to run the ball out to center court, jumped, and took the shot at the buzzer. The basketball seemed to hang in the balance forever, until it hit the net… Swoosh! The Kings won! It was a magical shot right at the end of the game by Evans, the entire arena was up on the their feet, cheering the winning team in their most glorious victory! It’s really an amazing shot to see. Final score: Kings 100/Grizzlies 98.

Paul says in Romans 8:37, that despite all the hardship, pain, and suffering in this world, “We are more than conquerors through Him who loved us.” Paul uses a Greek word to overemphasize the idea of winning like an Olympic athlete who dominates her competition, and leaves them in the dust. I really like the way the New English Translation (NET) translates the verse, “No, in all these things we have complete victory.”  Essentially Paul is saying, “There was no competition, we win!”

Ironically, Paul writes this verse of victory in the middle of a chapter that reminds us that there is still a fight, but that no struggle can remove us from the love of Christ. The struggle is real, my friends. Jesus didn’t lie to us. Being a Christian today and in the days of Paul was never supposed to be painless, uncomplicated, trouble-free, or simple. Jesus didn’t call us to a simple life as Christians. Instead, He called us to live a life of conformity… conformity into His image, which is opposite of the system that drives the world. Just a few verses earlier Paul reminds us that we have been “predestined to be conformed to the image of His Son” (Rom. 8:29). That means to be like Jesus, today.

So even as we continue to fight the simple life, to be different, to conform into His image, Paul reminds us that right now as we fight, we have already won! We are more than conquers.

Through Him who loved us. Even though we fight to be more like Christ in a culture that demands us to be more like them and to accept their ways and what they consider to be truth, we have already won by the love of Christ. Paul’s use of the word love is written in a way to explain Jesus’ forever, unchanging love: It’s a love that goes on and on. It’s not just one act of Jesus’ love from the past, it’s His love and grace that is working today to make us champions for Him.

So today if you are feeling overwhelmed, tired, beaten down, and like you’re just plain losing, remember, you are a conqueror in Christ because of His neverending love, and all that He’s done for you. And then look at your life and ask yourself, In what ways do I need to look more like Jesus and less like the world?