Christians often ask, “Can you explain the Jewish Passover to me?”

For 3,400 years, Jewish people have kept the Passover (Pesach) according to the commandment of God in remembrance of their deliverance from Egyptian slavery and captivity (Exodus 12:14). The book of Exodus explains the story of Passover.

The original Passover only had three food items: a sacrificed lamb, unleavened bread, and bitter herbs (Exodus 12:8). Through the centuries, Jewish people added more food items and traditions to illustrate the pageantry of the Passover, and give the service more meaning. The word seder (order) describes the ceremonial meal of the Passover. Each step in the seder is read from a booklet called the Haggadah (telling) that narrates the Exodus story throughout the dinner. This year Passover is held on April 10, 2017.

Many days are spent in preparation by cleaning the house of all leaven (Exodus 12:15, 20), especially in the kitchen. To symbolize that no leaven remains, father puts some breadcrumbs in the corner, brushing them into a napkin or envelope with a feather. Just before Passover, he burns the item outside the house to symbolize the house is cleansed from all leaven. Silver utensils used in the service are polished, and the best dishes set in their proper place for the event. The family is clothed in their Sabbath best. Father and son have gone to the synagogue for a service to usher in this special day. Returning home, the family takes their places around the table to begin the seder.

A number of food items are used to illustrate and symbolize the Passover story. 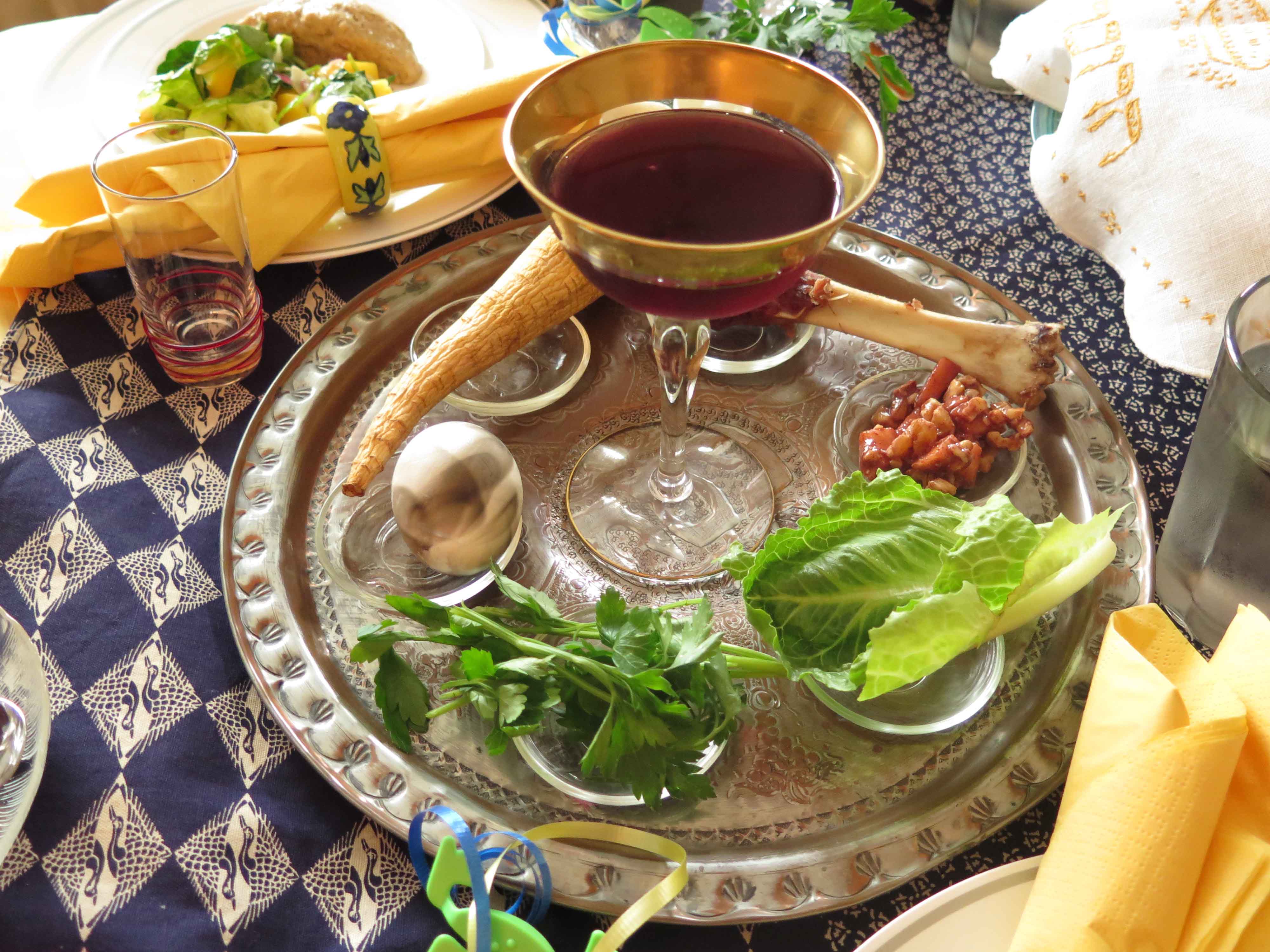 Passover cannot begin until mother, with head veiled, lights two candles on the table, followed by a blessing to welcome God’s Spirit to the seder service.

Father then chants the Kiddush; all partake of the first cup of blessing or sanctification (Exodus 6:6). Those participating in the event wash their hands (called urchatz), symbolizing they are sanctified (set apart) for this holy convocation. Partakers then dip a piece of parsley (Karpas) in salt water, and all eat, symbolizing they were delivered from their tears during the spring harvest.

Father lifts the matzoh bag containing three compartments of unleavened bread. He takes out the middle piece, blesses it, breaks it, wraps half in a napkin, and places the remaining half on the seder plate. The wrapped piece is called the afikomen, which Jewish scholars call dessert. Inexplicably, afikomen is the only Greek word in the seder service, and means, “I came.” Father hides the wrapped piece of matzoh that will be discovered later by a seeking child.

The New Testament makes it clear that Jesus the Messiah came to Earth and is called the Lamb of God and the Bread of life (John 1:29; 6:35). It is the second piece of matzoh out of three that is broken, a picture of Messiah’s crucifixion on the middle cross for man’s sin. The broken matzoh is a picture of the broken body of Jesus the Messiah (1 Corinthians 11:24). The matzoh wrapped in cloth and hidden is a picture of Messiah’s burial. At the appropriate time the wrapped piece of matzoh is found, redeemed by father with a coin or gift, and eaten just before drinking the third cup, identified as the cup of redemption.

When father reads the 10 plagues on Egypt, those around the table pour 10 drops of wine from their cup, symbolic of the suffering God brought against Egypt because of Pharaoh’s rebellion against God. The story of the lamb, matzoh, and bitter herbs is reviewed, after which the cup of judgment is drunk. The New Testament clearly states that Jesus the Messiah would drink the cup of death and judgment for sin (Matthew 26:39), as He died a sacrificial death by crucifixion (Matthew 27:35–50).

The New Testament makes it clear that Jesus the Messiah came to Earth and is called the Lamb of God and the Bread of life.

After the story of Passover is told, father mentions four sons and how they respond to the story. First is the wise son who celebrates with excitement and respect for the evening. Second is the wicked son that scorns Passover, saying “this means nothing to me.” Third is the naïve son who would like to understand the celebration, but is unable. The fourth son is too young to know what Passover is all about.

Participants wash their hands a second time. Then father takes the remaining half of the middle matzoh on the seder plate, along with the top matzoh, and distributes them to those at dinner. Horseradish (maror) is spread on the matzoh and eaten, producing tears to the eyes of participants. Shed tears remind participants of the cruel slavery of their forefathers in Egypt.

A Hillel sandwich made of matzoh, maror, and charoseth (a pasty mix symbolic of bricks) is then eaten to symbolize the three foods mentioned in Exodus 12:8. Hillel, a first-century rabbi, said a person that did not eat these items had not kept Passover. Most likely it was at this point in the Passover that Messiah said, “He that dipped his hand with me in the dish, the same shall betray me” (Matthew 26:23).

The roasted egg (beitzah) has many meanings given to it over the centuries by Jewish people from various cultures. Some households eat the egg at Passover; others do not.

Next, those around the table partake of the seder meal including the appetizer, soup, many courses, and dessert.

After dinner, the children look for the hidden afikomen. The child that finds the afikomen brings it to father, who redeems it back with a gift of money. The afikomen is symbolic of Jesus who paid the redemptive price for sin through His sacrificial death on the cross. The wrapped piece of matzoh is also symbolic of Messiah’s burial and resurrection on the third day to redeem mankind.

Then father takes the third cup of wine, called the cup of redemption (Exodus 6:6), blesses it, and all around the table drink. It was most likely at His last Passover, Messiah took the cup, gave thanks and said, “Drink from it, all of you. For this is My blood of the new covenant, which is shed for many for the remission of sins” (Matthew 26:27–28).

At this point, the youngest child opens the front door, father nods, whereupon the child shuts the door. Why this custom? Jewish tradition teaches that during Passover, if Elijah visits every Jewish home during the seder and drinks from the cup of wine at his place setting, Messiah’s coming is near. For Malachi wrote, “Behold, I will send you Elijah, the prophet, before the coming of the great and terrible day of the Lᴏʀᴅ” (Malachi 4:5).

Finally, all rise around the table and lift their fourth cup, called the cup of praise, and drink of it (Exodus 6:7). Passover is closed with the following prayer:

Our Passover service is completed; we have repeated its ordered tradition. With songs of praise we have called upon the name of God. May He who broke Pharaoh’s yoke, forever shatter all fetters of oppression and hasten the day when war will be no more. Soon may He bring redemption to all mankind—freed from violence and wrong, and united in an eternal covenant of brotherhood? Next year in Jerusalem!

This Passover prayer by Jewish people worldwide ask, “May He bring redemption to all mankind?” The next blog shows how Jesus the Messiah fulfills this prayer, the “Lamb of God who takes away the sin of the world” (John. 1:29)!

David M. Levy is the media resource specialist and a Bible teacher for The Friends of Israel Gospel Ministry.