Revelation is one of the most avoided books in the Bible. Pastors seldom preach from it. Sunday schools and small groups seem to have many more pressing things to study.

Let’s face it: Revelation can be a challenging book to read and understand. To many, it is a dark book, filled with images of wrath, destruction, and death. It can be downright scary. Then there are the strange images that come from John’s vision, which are so unlike anything we’ve seen or known. How is one to make sense of them?

And what does Revelation have to do with our calling to preach the gospel and make disciples? In a world that is falling apart, the study of prophecy, particularly end-times prophecy, can seem a poor use of time.

So are there any good reasons for us to engage with the Revelation?

Here are a few that cause us to pause and think before we just dismiss Revelation or justify putting it on the top shelf to collect dust:

1. It is God’s Word and, as such, we cannot just close the book on Revelation because we don’t like it or find it difficult to understand.

Both of these reasons indicate that many in the church today have lost sight of the value and purpose of prophecy. That is a normal outcome for those who avoid the study of prophecy. To say it is not worthy of study is to bring into question God’s wisdom in revealing it to us. The Bible makes it crystal clear that true prophecy is not an invention of man but was given to man by the Holy Spirit as God inspired men (2 Peter 1:20–21).

2. Revelation is Christ’s message to the church.

If we fail to read and study Revelation, we are missing important instruction from our Savior on how to live in this sin-cursed world. Imagine a bride ignoring the words of her loving groom. Christ’s letters to the seven churches were written for our benefit.

If we fail to read and study Revelation, we are missing important instruction from our Savior on how to live in this sin-cursed world.

The significance of the book is so great that Christ said, “Blessed is the one who reads the words of this prophecy aloud, and blessed are those who hear and obey the things written in it” (Revelation 1:3). There is blessing one receives from reading, listening to, and obeying the words of Revelation. No other book in the Bible makes such a promise. Believers who fail to read, study, and heed Revelation will miss out on promised blessings and are prone to go astray.

3. Prophecy, the accurate foretelling of what is to happen, is unique to the Bible.

No other religious book foretells the future with 100 percent reliability. Prophecy is given to us by God for our benefit. In Old Testament times, God’s prophecy served two purposes: 1) to warn people of God’s impending judgment if they failed to repent, and 2) to give people hope for the future. The same is true of prophecy in the New Testament. Revelation warns people to repent and avoid the coming wrath of God, which is unavoidable. It also gives us hope that God will judge evil and right the wrong that Adam’s sin brought upon His creation (Romans 8:19–22).

4. The study of Revelation enlightens our path in a dark world.

In the context of Christ’s power and return, the apostle Peter reminded us that “we possess the prophetic word as an altogether reliable thing. You do well if you pay attention to this as you would to a light shining in a murky place” (2 Peter 1:19).

When we study prophecy, we come to understand God’s grand plan for all of human history.

When we study prophecy, we come to understand God’s grand plan for all of human history. It is a light that shows us His way out of this world of sin and darkness. It also reminds us that, hard as we try, we can’t reform all of the evils in this world. Only God can fix the world through Christ.

5. Revelation answers the question, “How will God restore His Kingdom that is in rebellion?”

Today, we live in a rebellious kingdom that hates the King and His Son, Jesus Christ. A king can’t rule over a kingdom if his subjects are in rebellion. God gave Revelation to us to open our eyes to the path He designed before creation to take back His Kingdom. In Matthew 19:28, Jesus referred to it as the “genesis again” time on Earth. Peter called it the “times of refreshing” and “restoration of all things” when Christ returns (Acts 3:20, 21). The first book in the Bible, Genesis, is the book of beginning and the last book, Revelation, is the book of ending. In fact, it is the ultimate ending! In Revelation 1—3, Christ councils the church how it should live in a rebellious kingdom. He warns the church of dangers to avoid and promises blessing for those who endure to the end. Chapters 4—19 lay out God’s process to eliminate the rebellious ones from Earth in preparation to restore His Kingdom. Jesus Christ, the Kinsman Redeemer, the Lamb who bought back man’s right to rule over the earth with His own shed blood, will remove the usurpers so He can restore God’s Kingdom and rule over it. Revelation closes with God’s restored Kingdom on this earth for 1,000 years (Revelation 20), followed by His eternal Kingdom in the new heavens and earth (Revelation 21—22).

6. Revelation is a call to all who do not know Jesus Christ as Lord and Savior, to come to faith.

It warns people of the eternal judgment that is coming upon all the enemies of God and the hope we can find only through faith in Christ.

We should not fear the wrath of God in Revelation but rather, it should motivate us to share the gospel with everyone we know.

For the church to avoid Revelation is to avoid one of the greatest evangelistic tools God has given us. We should not fear the wrath of God in Revelation but rather, it should motivate us to share the gospel with everyone we know.

There are many reasons to value the book of Revelation and study it, but none are more salient than the simple fact that it is God’s inspired Word. We hold that all Scripture is relevant for faith and practice, which includes the prophecy of Revelation. Israel began straying from God when they started choosing only the parts of God’s Word they liked and ignored the rest. In time, they made God into their own image rather than the God revealed in Scripture. We would do well to learn from Israel’s failure and hold true to all of God’s Word, even the parts that are difficult to study.

Join us March 5—7 for our free Look Up Virtual Conference, where we’ll be studying the book of Revelation. Register Today! 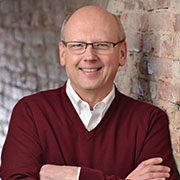 Jim Showers is the Executive Director and President of The Friends of Israel Gospel Ministry.