Being Jewish in America is all I know. The reason is simple: I am Jewish, and while my experience may be similar to many other Jewish people, it is also very different. I was born and raised at a particular point in the timeline of American history, a time period that produced an experience entirely different from other generations of American Jews. Thus my experience is distinct from my grandparents’, my parents’, and my children’s.

Anti-Semitism was and is a constant bedfellow of the Jewish people. As far back as the book of Esther, godless Gentiles were gunning for Jews just because they were Jews. Esther 3:8 records that Haman told Ahasuerus, “There is a certain people… their laws are different…. Therefore it is not fitting for the king to let them remain.”

Like the Jews in Shushan, my grandparents were four of millions of “different” Jews marginalized in Eastern Europe. Though they lived in different countries, each of them took the courageous action to leave and come to America. America was considered the Goldina Medina (Golden Land) because it was a place where Jews could live free as Jews, worship as Jews, and prosper as Americans. My parents and I became the beneficiaries of their decision.

America was considered the Goldina Medina (Golden Land) because it was a place where Jews could live free as Jews, worship as Jews, and prosper as Americans.

My father and uncles often told me stories of their years in the military during World War II. They were justly proud of fighting and defeating the Nazis, liberating Holocaust survivors, and preserving freedom in America. In fact, I was often reminded of the family members lost (my father’s mother lost her mother, several sisters, and other extended family) when the Nazis invaded Poland in September 1939.

Though I was born eight years after WWII ended, the Holocaust was a topic of conversation constantly while I was growing up. My grandparents agonized over it while my parents and relatives referred to it often. I learned about it in my history classes in public school and explored its details in my Jewish studies in Hebrew school. We learned it was brought on by Christians who hated the Jews. We were the Christ killers who the Nazis said poisoned the culture. Though we were taught America was a wonderful place, I was also taught to be on guard and to always be skeptical of the goyim, the Gentiles.

I was born in 1953 to first-generation Jewish-American parents, which identifies me as a Jewish baby boomer. I was raised in a middle-class suburb in the Midwestern U.S. and worshiped in an Orthodox synagogue. I ate kosher food, and I attended Hebrew school four days a week and a three-and-a-half-hour Sunday school class each week. I was aware of my Jewishness 24/7.

My neighborhood was made up mostly of Jewish households, with multiple synagogues, delis, a couple of kosher butcher shops, and a large Jewish book store. Our families were closely linked through major life-cycle events such as births and circumcisions, Bar Mitzvahs, marriages, and deaths. My Bar Mitzvah reception was like a wedding: Everyone was dressed up, we were in a hall, ate catered food, and had a band for entertainment. Most of my friends celebrated in a similar way. We knew these rites of passage were different from what the goyim did. Everything about us was different: food, worship (one God, no man-god), even language—my parents often spoke Yiddish.

The seven biblical feast days of Leviticus 23 are very important in Judaism. Each of them is significant and honored, but three of them (Passover, Rosh Hashanah, and Yom Kippur) were fundamental within my family. They required a combination of synagogue attendance, eating or not eating certain foods, and staying home from school or work. Other minor festivals such as Purim (from the book of Esther) and Hanukkah were also important holidays.

My college experience was a breakout time for me. By that I mean I left home to live on campus and, as a teenager in the late 1960s and early ’70s, I desired to embrace the world—the Gentile world. I dated Gentile girls for the first time and lived with people who had no idea what Jewish people were like. While I certainly compromised my Judaism, I never compromised my identity. It was at this time I heard the gospel but it did not sound like Good News: “Believe in Jesus or hell awaits you.” Wow, I thought, no way I would believe in the One responsible for so much trouble for my people.

I thank the Lord for His sovereignty. I know I was born at the right place at the right time. My Jewish-American experience was wonderful. I learned I was part of a people chosen by God, givers of the Scripture, who looked for one of their own who would redeem them. I looked for the Messiah every Passover and hoped to see His day. American life is a privilege brought about by the blood, sweat, and tears of many who sacrificed for my way of life. America provided a place for freedom of speech and religion, and thus I benefited as a Jew who heard and finally believed the gospel. What a blessing! 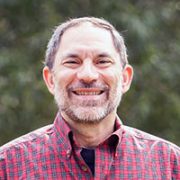 Steve Herzig is the director of North American Ministries and a Bible teacher for The Friends of Israel.