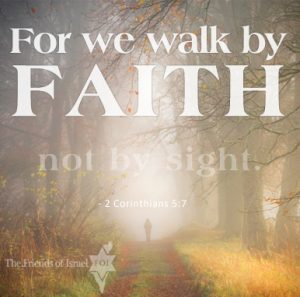 Imagine what it would be like if God told you to leave your home, your family, and all you’ve ever known to go to a foreign land because He has some big plans for you and your descendants.

Most people would be apprehensive about such a prospect!

I’m always amazed, though, when I read about the time God issued such a charge to Abraham. Abraham was a very normal human being. He sometimes questioned God. He sinned. He was fearful. But when God called him to leave all he knew to move to a land he had never seen before, his response was one of simple faith: “So Abram (Abraham) departed as the LORD had spoken to him” (Genesis 12:4).

In his second letter to the Corinthians, Paul reminds believers that they are to “walk by faith, not by sight,” something Abraham did, literally. Walking indicates movement. It is not a standstill, waiting for God to move you. Rather, it is going forward, trusting in the sure promises made by a loving and unchanging God.

Walking by faith means not allowing circumstances or feelings to dictate your reliance upon the truth. When God called Abram, He told him He would make him “a great nation” (Genesis 12:2), a promise reiterated later when God tells Abram that his descendants will be as numerous as the stars in the heavens.

Such a promise must have seemed outlandish to the childless man and Sarah, his wife. Indeed, at one point, the faith of the couple falters, as they decide to take the matter of producing an heir into their own hands (Genesis 16). Their failure to walk by faith in this matter ultimately led to much grief for the Jewish people. However, the writer of Hebrews records that when it came time for Isaac, the promised son to come into the world, Sarah, “by faith… also received strength to conceive seed, and she bore a child when she was past the age, because she judged Him faithful who had promised” (Hebrews 11:11).

How easy it is for us, too, to walk by sight, trusting our circumstances and feelings instead of God’s promises. Terrorism. Murder. Corruption. Just a glance at the morning headlines alone, can cause us to wonder if God is really in control.

Indeed, one of the greatest snatchers of joy and confidence in the Lord is our feelings. One moment we feel that all is well. The next moment we feel doubtful about our security in the arms of Christ. But, like Sarah, we must walk by faith, looking past appearances and what seems likely; and instead clinging to the Word of God, which tells us that we are to live by faith “in the Son of God who loved me and gave Himself for me” (Galatians 2:20).

Walking by faith is certainly contrary to the nature of humanity; but what a joy it is to know that our Guide is the promise-keeping God Himself.

Ty is a Field Representative for The Friends of Israel in Las Vegas, Nevada. He speaks in various venues educating Christians about the necessity of supporting Israel and the Jewish people.