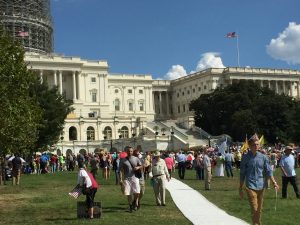 I traveled down to Washington, DC, to attend the End the Iran Deal rally on the west lawn of the Capitol Building the other day. The event was packed with 50 speakers, including presidential candidates Senator Ted Cruz and Donald Trump, radio and TV personality Glenn Beck, radio host Mark Levin, and even Duck Dynasty star Phil Robertson. Let’s not forget the list of U.S. Representatives who showed up to oppose the deal, even though it was set to pass.

At the heart of each speaker’s message was an impassioned plea for the President and Congress to wake up and realize that making this deal will only harm the interests of the U.S. and our allies long term.

Of course each speaker shared his concerns with the deal:

The overarching message of each speaker, however, centered on one core idea: Never Again. Almost 80 years ago the Western nations, eager for peace after World War I, were willing to shake the hand of evil himself in order to guarantee there would be peace over war. I’m speaking of Neville Chamberlain, the former British prime minister who signed the Munich Agreement with Adolf Hitler and gave over some of Czechoslovakia in order to prevent war. Chamberlain made a deal with evil for what he called “peace for our time.” Well, look how that worked out: A few years later the nations of the world entered one of the bloodiest wars in human history, World War II.

The result of making peace with evil lead to the extermination of 6 million Jewish people and the hostile takeover of European countries by Hitler’s Nazis.

History should be a guide for us, to remind us that appeasement politics with a rogue government whose public intentions are to spread Islam globally through terror and force just won’t work. It won’t work because even though all parties are using the same term, “peace,” our goals and motives at the negotiating table are vastly different.

Appeasement politics, which we are using with Iran right now, has the ability to glance over the truth and neglect the evil we are actually embracing in order to avoid war. The goal of P5+1 is to prevent Iran from getting a nuclear bomb and to avoid confrontation with the Islamic Republic; yet Iran’s motives are totally different. In a comedic defiance to the deal, the supreme leader of Iran proudly shares on social media that his goal is not peace, but instead promotes instigation and terror against Israel and America. Yet, our leaders look beyond his unveiled statements and ignore his warnings all in the name of peace.

If we fail to restore #truth God will do it for us. @glennbeck #StopIranDeal pic.twitter.com/RyW0tbbaIX

There can be no peace with a people who chant "death to Jew" "death to America" @glennbeck pic.twitter.com/2839NyQvWs