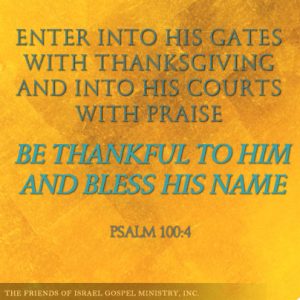 It was a perilous journey. The Atlantic Ocean on September 1620 was tumultuous.  Then on November 9th, a shout was heard from the deck of the ship called Mayflower, “Land-Ho!”  In humble thanks to God, the Separatists from the Church of England, fell on their knees and sang Psalm 100.

Their first winter was disastrous.  Less than 50 survived of the 102 that sought religious freedom in the New World. Later, in the providence of God, two English speaking natives came to the settlement and taught them to hunt, fish and cultivate local food.  By the following year the Puritans were blessed with a bountiful harvest.  Desiring to offer thanks to God, they modeled the first American Thanksgiving on the Jewish celebration of the Feast of Tabernacles.

According to the ancient rabbis, during Temple times, Psalm 100 was sung at the time of the peace offerings (Targum). The Peace offering usually signified fellowship and praise.  However, it was also viewed as an expression of sincere gratitude of thanks for God’s Salvation.

In the Old Testament sin was atoned by means of the sacrificial system. Priests were delegated the responsibility of ministering in the Temple.  The priests served as the people’s mediator and it was all an elaborate ritual. It was a good system but, something better and lasting was promised to come.

Only priests were allowed to enter the inner Temple gates.  But now, through the finished work of Jesus the Christ, the Great High Priest, all may “enter into His gates with thanksgiving.”  Animal sacrifices are no longer required. Jesus, the Lamb of God, offered Himself to cleanse us from all sins. So now, any believer in Jesus can enter “His courts with praise.”  Therefore, there is a constant open opportunity in a spirit of gratitude, to always “be thankful to Him, and bless His name.”

The ancients regarded thankfulness and gratitude as supreme expression.  There’s an old Jewish saying, “In the days to come, all prayers will be abolished, except prayers of thanksgiving” (Wayyikra Rabbah, 9:7). It was also anticipated in fulfillment of the Feast of Tabernacles, “that in the Messianic era all sacrifices will cease, but only the sacrifice of peace, gratitude and thankfulness will continue on for ever” (Midrash).

Psalm 100:4 is an invitation to a grateful heart. “Let us therefore come boldly to the throne of grace, that we may obtain mercy and find grace to help in time of need” (Hebrews 4:16).  “Therefore, having been justified by faith, we have peace with God through our Lord Jesus Christ” (Romans 5:1). 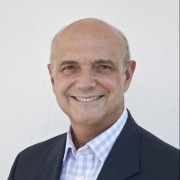