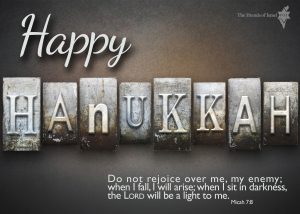 Do not rejoice over me, my enemy; When I fall, I will arise; When I sit in darkness, the LORD will be a light to me. (Micah 7:8)

If ever there were a people that could claim this verse as their national motto, it would be the Jewish people. Their history is replete with examples of how enemies sought to destroy them, yet they were able not only to survive, but thrive.

One of the most well-known examples is found in the holiday of Hanukkah. During Hanukkah, Jewish people around the world recall how God delivered them from a terrifying and destructive enemy. His name was Antiochus IV.

Antiochus was a Syrian ruler who, during the years 168-165 B.C., forced a Greek world-view on the people of Israel. Under penalty of death, the Jewish people were forbidden to practice and observe the commandments of their God. At the same time, they were compelled to worship false, Greek gods by sacrificing swine. Antiochus himself did this in the sacred Jewish Temple, and even further defiled it by setting up an image of Zeus upon the Temple’s bronze altar.

The response of the Jewish people was mixed. Some capitulated. Others refused to comply, with many suffering horrible deaths. Still others fought back. These were led by an aged priest, Mattathias, and his five sons – Judah being the most famous – who became known as the Maccabees.

In 165 B.C. the Maccabees reclaimed the holy Temple and cleansed it from its defilement. In remembrance of the Temple Dedication (Hanukkah), Jewish people have celebrated these events every year for eight days. Part of that celebration includes lighting the hanukkiyah, the nine-branched candelabrum, in memory of the relighting of the Temple menorah during the first Hanukkah.

The story of Hanukkah is truly a demonstration of the truths of Micah 7:8 in action.

However, it must be remembered that the victory Israel experienced then, and experiences now, the ability of Israel to arise after they have fallen, lies not in themselves, nor does it lie within anyone. Victorious resurrection belongs to the Lord and to Him alone (1 Chron. 29:11-12).

Like the Temple menorah, the promised Messiah came as “a light to bring revelation to the Gentiles, and the glory of [God’s] people Israel (Luke 2:32). Jesus said, “I am the light of the world. He who follows Me shall not walk in darkness, but have the light of life” (John 8:12).

Those who know Him are assured of a future illustration of Micah 7:8 when the Scriptures promise:

The last enemy that will be destroyed is death. . . . So when this corruptible has put on incorruption, and this mortal has put on immortality, then shall be brought to pass the saying that is written: “Death is swallowed up in victory.” “O Death, where is your sting? O Hades, where is your victory?” The sting of death is sin, and the strength of sin is the law. But thanks be to God, who gives us the victory through our Lord Jesus Christ (1 Cor. 15:26, 54-57).

Do you currently sit in darkness? Trust in Jesus. He is your light and your salvation.

Bruce Scott is the director of Program Ministries at The Friends of Israel Gospel Ministry and is the author of The Feasts of Israel: Seasons of the Messiah.