Romans 9-11 form a biblical view of the gospel, the Good News of Jesus the Messiah.

Early in his book Paul states clearly that  everyone needs the gospel: “I am not ashamed of the gospel of Christ for it is the power of God to everyone who believes, to the Jew first and also to the Greek” (1:16). Later in Romans 9–11, Paul explains in more detail the role of the Jewish  nation in God’s program. In chapter 9 he shows Israel’s Past Dealings; in chapter 10, Israel’s Present Denial; in chapter 11, Israel’s Prophetic Deliverance.

In Romans 10:1 Paul declares that his “heart’s desire and prayer to God for Israel is that they may be saved.” That word “they” is used all the way down to verse 14, which holds great meaning for my wife and me. This verse became the impetus for us considering the need of Paul’s “countrymen, according to the flesh” (9:3) for the gospel. God used it mightily in my heart as I read the Scripture that Sunday morning for our church. This verse became the beacon to direct us to  eventually serving with The Friends of Israel. 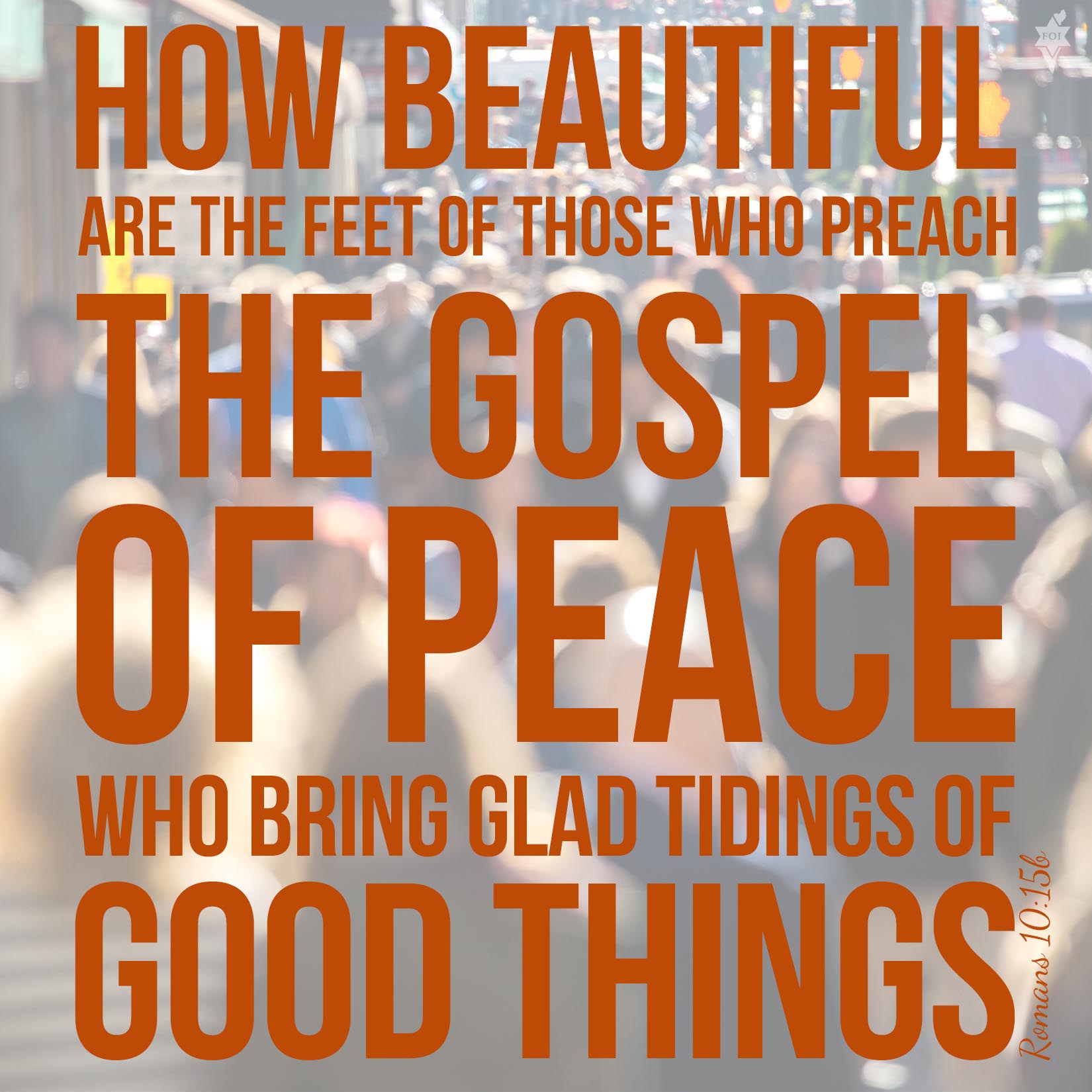 In these two verses, five words show why we go to our neighbor and the nations with the gospel. Note the five words: call; believe; hear; preach; sent. Paul begins with the conclusion of sharing the gospel in his exposition. Calling on the Lord to be saved comes from verse 13, a direct quote from Joel 2:32. Calling on the Lord is praying and asking Him to come into our life. While serving in a Good News Club with Child Evangelism Fellowship, I remember a 5-year-old girl, our hostess’s daughter, prayed a simple prayer asking the Lord Jesus to save her from her sins. That’s calling on the Lord.

Next is believe––to trust, to place your whole weight upon Him. We call on Him because we have believed the message we heard, we embrace Him and invite Him into our lives. When we do that, He comes in and He makes us His children. The message we heard was the gospel clearly shown in 1 Corinthians 15:3–4.

Paul then declares that we believe because we heard. Some believe that if they merely live a good life, demonstrating the gospel in their life, they won’t have to give out the gospel. However, clearly if the lost are to hear, someone must tell. As Paul states in Ephesians 6:19, “And for me that utterance may be given to me, that I may open my mouth boldly to make known the mystery of the gospel.” For me, God chose a pastor from Indiana who came to our church and shared the message and invitation to believe, and I came to Christ that February night.

God chose the method of preaching to give out the message to all who need it (1 Corinthians 1:18–25). A Christian preacher in a Muslim nation told of a man who reacted to his message, saying that the Christian message and Christians are fools. The speaker stunned him when he agreed, and told him that the Bible agrees with him. “We are fools,” he said, then he showed him 1 Corinthians 1:18–21. Eventually, that Muslim listener became a believer in Jesus Christ! Preaching may seem foolish from a human view, but to God it is precious!

Finally, the last word is truly where outreach begins: Sent. We who share the gospel message are “sent ones.” Sent by God first, then by the local church to the harvest field. On February 15, 1978, following my ordination council, my home church in Michigan sent me out to serve the Lord as a messenger of the gospel. I was sent to serve the Lord, and share the gospel wherever God led. Eventually He led my wife and me from serving a local church to serving with The Friends of Israel. But God’s work begins with Him sending His servants to the harvest field of the world (Acts 13:2).

From the first century until now, those five words have directed the gospel  enterprise and will until Jesus comes. Those five words: Call. Believe. Hear. Preach. Send. That’s Sharing the Gospel in Five Words.

Tim Munger is a Church Ministries Representative for The Friends of Israel Gospel Ministry in the Detroit, Michigan area. Tim organizes and speaks at church conferences around the country.