There’s a small South Florida city nestled on the shores of a large, beautiful lake in the midst of citrus groves and cattle ranches.

George Sebring, who dreamed of a place where people could come to relax and be refreshed, founded it. He often invited famous preachers and servants of the Lord to enjoy the warm sunshine, white beaches, and crystal waters in order to rest and reignite their passion for Christ.

One such guest was a well-known traveling evangelist and songwriter, Charles Weigle. Even though his revivals were well attended and God was at work, his wife and in-laws scoffed at his itinerant ministry. In an attempt to escape the enticements pulling his family apart, he moved from California to Florida.

The turmoil didn’t stop and Charles’s wife finally told him, “I don’t want to live the life you are living. I want to go the other way—to the bright lights.” She took their daughter and left. Months later, he found her in Los Angeles where she boasted of her worldly liberties. His reputation was tarnished and his ministry passion was lost in grief. Disheartened and overwhelmed, he contemplated ending it all. Like David in Psalm 142:4, he felt as if no one cared for his soul.

The darkness lingered for years. Yet, one day, sitting in his home in Sebring, the Lord opened Charles’s broken heart and the words began to flow. As he sat at the piano overlooking the beauty of Lake Jackson, a new hymn poured from his weary soul. God’s grace and loving kindness were embracing his lonely heart.

No one ever cared for me like Jesus,
There’s no other friend so kind as He;
No one else could take the sin and darkness from me—
O how much He cared for me!

Almost 90 years later, hardly a day goes by that the words of that hymn don’t come to my mind as I walk the shores of that lake or pass the house where Charles Weigle lived. At times I’ve poured out my own fears and troubles to the Lord. Other times I think of those who are facing seasons of discouragement, heartache, and doubt. I often ache for those struggling with life-threatening illnesses. Sometimes, I grieve for fellow servants of God who left their ministries, broken and alone, and I pray for those who are on the front lines of ministry, serving in a broken world and a church under attack. I lay them all at the feet of the God who hears and cares.

Charles Weigle’s wife never returned. Christ’s love doesn’t promise to take away all our troubles in this life, but it does overcome the darkness of doubt and fear with strength and hope by opening our eyes to an everlasting purpose and an eternal Paradise built by His love.

“Humble yourselves under the mighty hand of God, that He may exalt you in due time, casting all your care upon Him, for He cares for you” (1 Peter 5:6–7). 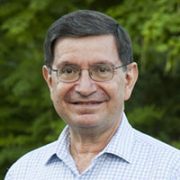 Clarence Johnson is a biblical educator, writer, and speaker.