“A nd the Scripture, foreseeing that God would justify the Gentiles by faith, preached the gospel beforehand to Abraham, saying, “All the nations shall be blessed in you.” (Gal 3:8 NAS)

In what was perhaps his earliest letter (c. A.D. 48), Paul defended his apostleship and gospel to the believers in the Roman province of Galatia. Although these believers—both Jews and Gentiles—had received their salvation and the gift of Spirit by grace through faith (Gal 3:1-5), they were being pulled back to a legalistic understanding of salvation promoted by Judaizers. These Judaizers questioned Paul’s apostolic authority and suggested that the Jewish and Gentile believers had been deceived by Paul into thinking that obedience to the Law of Moses was no longer necessary for salvation (Gal 1:6-10; 5:6-12). However, those who questioned Paul’s gospel needed to remember something important. He had not invented the gospel of grace he preached, a gospel sufficient for both Jews and Gentiles alike. God had, and God had preached this gospel beforehand.

When God created the heavens and the earth, He intended His creation to be a realm over which He would mediate His rule through mankind (Gen 1:26). In order to accomplish this purpose for creation, humanity would need to represent Him. It would need to be made in His image and possess His life. As image-bearers, the flourishing of humanity’s rule under Adam—God’s preeminent mediator—would lead to the flourishing of God’s representation and rule over the earth. Since the earth would be populated by those who represented God, it would be a realm filled with His glory. In order to equip humanity to serve Him as His representative stewards, God bestowed on humanity the fullness of life, a life possessed by God and given as a gift of God through an unmerited blessing.

“And God created man in His own image, in the image of God He created him; male and female He created them. And God blessed them; and God said to them, ‘Be fruitful and multiply, and fill the earth, and subdue it; and rule over the fish of the sea and over the birds of the sky, and over every living thing that moves on the earth.’” (Gen 1:27-28 NAS)

Tragically, Adam’s disobedience in the Garden of Eden led to humanity’s fall from blessing (Gen 3; Romans 5:12-14). With the introduction of sin and death into the human race, mankind no longer represented the life of God on Earth. Instead, human beings were born into the world totally depraved and spiritually dead.

The early chapters of Genesis record the growth and enduring power of sin and death in human history (Gen 4–5). Despite the preservation of an elect lineage through Seth that anticipated the coming of the promised Seed of the Woman who would judge the Serpent (Satan) and end his rule (Gen 3:15), the growth of evil became so great that God judged man’s wickedness with a flood. Only Noah and his family were spared by an act of God’s grace (Gen 6–8). While the judgment of God was just, human history after the flood revealed that it had not fixed its fundamental problem (Gen 9–11). Judgment could never remedy the problem introduced by the fall. Only an unmerited act of blessing could do that. According to the sovereign will of God, this plan for blessing would come through an important partnership with Abram.

“Now the LORD said to Abram, ‘Go forth from your country, and from your relatives and from your father’s house, To the land which I will show you; and I will make you a great nation, And I will bless you, and make your name great; and so you shall be a blessing; and I will bless those who bless you, and the one who curses you I will curse. And in you all the families of the earth shall be blessed.’” (Gen 12:1-3 NAS)

Through Abram, all families of the earth would be blessed and receive the fullness of God’s life so that they might serve him according to his purpose for mankind in creation.

Abram himself experienced an aspect of this blessing when he was justified before God. Although God had promised that it would be through Abram that all nations of the earth would be blessed (Gen 12:3), the early record of Abram’s partnership with God revealed that it was not God’s intent to fulfill what He had promised through Abram himself. Instead God would fulfill His promises through inheritance. While the nation to come from Abram would include many (Gen 15:5; cf. 13:14-16), Abram’s heir would be One (Gen 15:4; cf. 12:7). When Abram believed that God would give him an Heir to inherit and fulfill what he had promised, Abram was blessed with justification (Gen 15:1-6). Although Abram’s initial heir was Isaac, the ultimate Heir who would inherit and fulfill God’s promises to Abram was Jesus Christ.

Abram’s justification provided the model by which God would bestow his promise of blessing to both Jews and Gentiles (Gal 3:1-7; Rom 4:1-25). As a promised blessing, God’s provision was a gift that needed to be received rather than achieved. Like Abram, this unmerited blessing would only be acquired by faith in the ultimate Heir of Abram, the One who would be revealed in history as Jesus.

In his letter to the believers in Galatia, Paul reminded them that the gospel of grace he had preached was not a gospel of his own invention. It was a gospel that God had preached beforehand. This promised blessing of the gospel could not be achieved through obedience to the Law. The justification of Abram was sufficient proof. As a promise of blessing given before the Law, a blessing that anticipated the restoration of all nations, the gospel placed no burden on Gentiles to pursue salvation through a Law that had yet to be given. Rather, the promise of blessing anticipated an unmerited act of God to restore humanity to the fullness of life so that it might fulfill its intended purpose. Through the blessing of the gospel, humanity would once again bring glory to God as it represented and mediated his rule on the earth he created. It was a blessing that could only be appropriated by grace through faith in the Heir of Abram, Jesus Christ. 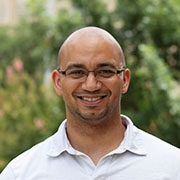 Dr. Nathan Hoff, Ph.D is the Assistant Professor of Bible Exposition at Dallas Theological Seminary. His academic interests include hermeneutics, dispensationalism, and biblical theology. He resides in the Dallas, TX area with his wife, Abby, and their four boys.