“You will be a mocker at the cross.”

I was a little shocked at this declaration from the director. I was performing in the Easter play our school’s music department put on every year. I’m not sure any of us were prepared for that first rehearsal. I remember looking at those chosen to be mourners at the cross. They were huddled together getting into character, crying and telling each other that their Messiah was wrongly accused. I saw the actress playing Mary, Jesus’ mother, standing alone watching the stage as they prepped the actor playing Jesus for the crucifixion. As I began preparing with the other mockers, everything we said felt wrong, but we needed to get into character if we wanted to make the scene feel real to the audience. “He lied to us. He told us He was the Son of God! Now look at Him, He is being humiliated—crucified between two common thieves! We left our families for Him. He tricked us with demonic magic! He is not the Messiah! He is an imposter! He can’t save us from Rome!”

It was time to go on stage. As they opened the curtain, they raised the actor up on the cross and fake blood poured and splattered the floor. It was controlled chaos. The mourners cried. The mockers walked around yelling terrible things to Jesus and His followers, pretending to spit at them. The scene only took a few minutes and ended with Jesus crying out, “It is finished!” The lights cut out and we ran from the stage.

Up until this point whenever I read the crucifixion account, I never identified with the mockers or those who denied Jesus and yelled for Pontius Pilate to crucify Him. I always imagined myself among the faithful mourners crying near my dying Messiah. But let’s be real, there were very few of them and the majority wanted Jesus to die. The mourners were risking their lives to be near their Messiah at this time. But the mockers—those that laid palms down and cried, “Hosanna!” as Jesus rode into the city of Jerusalem just days before—they were angry. Angry that the man they hoped was the Messiah they had read about in their Scriptures was not who He said He was. He was not plotting to overtake Rome but instead asking them to look inside their hearts at their own sin.

Yes, many rejected Him, but I’m humbled because it was that rejection that led to the gospel coming to me, a Gentile.

As I get older and more aware of my depravity, it is easier to put myself in the mockers’ shoes. Yes, there were the religious leaders who were poking the crowd in order to expedite Jesus’ death, but many of those mockers were followers of Jesus only a few short days before. Looking now, 2,000 years later with the entirety of the Scriptures before me, I see plainly that the prophets were speaking of the Messiah coming twice. The first time would be as our Passover lamb, dying for the sins of man; the second will be to right the wrong in this world.

Jesus, the Son of God came humbly to Earth and was born in a stinky stable in the town of King David. He grew up in the tiny town of Nazareth, a simple carpenter’s son. He lived quietly for 30 years and then when the time was right, He revealed who He was. And if I had known little Jesus—the good son of Mary and Joseph—was now proclaiming that He was the one the prophets spoke of all those years ago, then I too would have been skeptical. “He came to His own and His own people did not receive Him” (John 1:11). I get it, that’s a hard sell.

A Message to the Church

Throughout church history, it saddens me that many saw this rejection as the Jewish people’s fault. I cringe when I read how many call them, “Christ-killers.” He laid down His life; Jesus willingly went to the cross (John 10:17-18). Yes, many rejected Him, but I’m humbled because it was that rejection that led to the gospel coming to me, a Gentile. The apostle Paul says in Romans 11:11-12, “Rather through their [Israel’s] trespass salvation has come to the Gentiles, so as to make Israel jealous. Now if their trespass means riches for the world, and if their failure means riches for the Gentiles, how much more will their full inclusion mean!”

Oh church! Do you see? We were brought the Good News of the Messiah because He was rejected by His own! Do you feel the weight of that reality? We now have a relationship so sweet and intimate with our Maker that it makes those who do not jealous. May we invite those who long for our peace to accept Jesus as their Messiah.

As we celebrate Jesus’s death, burial, and resurrection this weekend, let us remember we were all mockers of Jesus and He rescued us. Let’s celebrate this Good Friday with rejoicing and singing because it was and still is a Good Friday!

Thank you, Jesus, our Messiah. 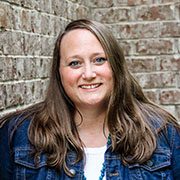 Sarah is the Executive Director of Choices Resource Center in Oak Ridge, Tennessee. She lives in the Knoxville, TN area with her husband, Martin, and their son.