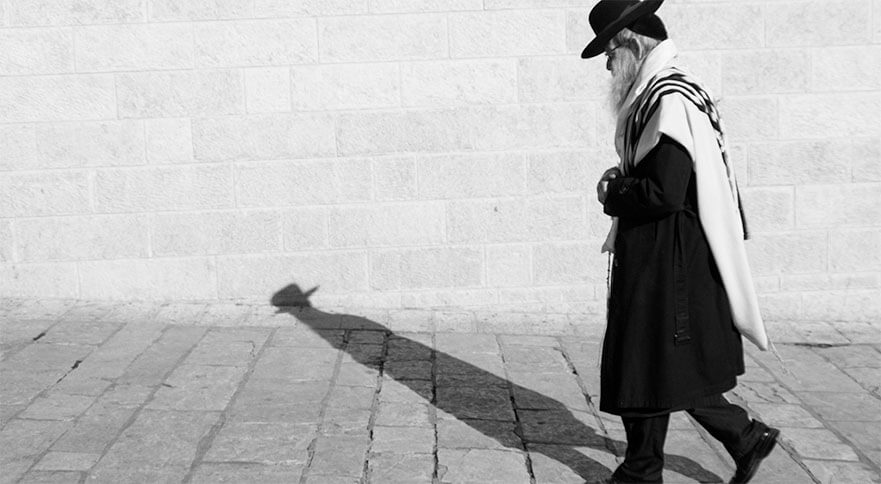 Marton, a 90-year-old friend, recently decided it was time to move into an assisted living center. Just a few weeks ago, we began the process of cleaning out his house, starting with his office.

His desk likely hadn’t been cleaned out in 20 years. Everything was covered with a fine layer of dust, time’s all-encompassing blanket. There were computer program manuals from the late 90s, birthday cards from some of his friends and family members, and a stack of printer paper. But then I saw it. Underneath the pile of paper was a small, yellowed card with a picture of an Orthodox Jewish man on the front, Hebrew script scrawled underneath.

Carefully, I lifted the fragile card from the back of the desk and examined it. The man in the picture was clad in all black, a wide-brimmed hat on his head. His soulful, hooded eyes stared back at me, no smile visible beneath his full, gray beard.

Unable to read the Hebrew, I took the card out to Marton in his living room.

Marton looked at it.

“My goodness! My goodness!” he kept saying, as he reached for his reading glasses. “Where did you find it?”

Marton explained to me that the card was a precious keepsake of the most horrific event of his life.

“I haven’t seen this in years. I thought I lost it. This is the picture!”

Marton explained to me that the card was a precious keepsake of the most horrific event of his life.

In the 1930s, Marton was a young boy living in a poor Budapest neighborhood. His family’s life revolved around the synagogue, where he prayed several times a day and attended school. Life was not without its difficulties, but it was a peaceful one.

The tranquility came to a screeching halt, however, in 1944. That’s when the Nazis marched into Budapest. Marton and his family, along with many of their neighbors, were told they would be relocated to a cordoned-off area, a ghetto.

Before moving into the ghetto, though, the Ackerman family was first taken to a horse-racing track, where the men and women were divided into two groups.

“My brother and I went to one side, and the other part of my family went on the other side,” Marton told me. “This was the first time I was away from my mother.”

At the race track, 15-year-old Marton encountered the complexities of human nature and of the war in particular. After being ordered to hand over his wallet by a member of the Arrow Cross Party, something strange happened.

“I gave him my wallet that had only my Mexican birth certificate and a picture of the Belzer Rebbe that my grandmother gave me,” Marton said. “I told him it was my grandfather. He gave me back my wallet with the birth certificate and the picture. Surprisingly, this man gave me 100 pengő. It was a big sum at that time, for me at least. I had never seen a 100 pengő. He said, ‘Good health. Good luck.’ To this day, I do not know why he did that, but it helped me survive the war. I later used it to buy apples and potatoes from the farmers.”

Marton studied the picture, a slight, sad smile on his face. The photograph I found underneath the stack of paper was the same photograph the Nazi official gave back to Marton, along with his birth certificate and the money. The man in the photograph, “the rebbe,” is Aharon Rokeach (1880-1957), a revered Hasidic rabbi from Ukraine, who allegedly had miracle-working powers.

The man in the photograph, “the rebbe,” is Aharon Rokeach (1880-1957), a revered Hasidic rabbi from Ukraine, who allegedly had miracle-working powers.

After gazing at it for several minutes, Marton turned to me and handed the picture back.

As I held the picture in my hands, looking into the rebbe’s sad eyes, I kept shaking my head. I was holding a piece of paper that had survived one of the most horrific periods in world history, not only an artifact of history, but a symbol of God’s faithfulness to His Chosen People, too.

I thought of God’s words to the prophet Jeremiah. He said the only way the Jewish people can be destroyed is for the forces of nature themselves to be destroyed:

Throughout the Old Testament, God commanded Israel to set up stones as memorials of significant events. After the children of Israel crossed the Jordan into the Promised Land, for example, God told them to take a pile of 12 stones into their camp “that this may be a sign among you when your children ask in time to come, saying, ‘What do these stones mean to you?’” (Joshua 4:6). That memorial would serve as a teaching moment for the parents of the next generation to tell of God’s faithfulness to His people.

The little picture of the rebbe is just such a memorial. While the man in the picture was once hailed as a miracle-worker, the true Miracle-worker is the God of Israel. And someday, when my children ask what the picture of the rebbe means to me, I will tell them the story of God’s faithfulness to His chosen nation, Israel, and of His faithfulness to me and to all generations (Psalm 119:90).

Ty is a Field Representative for The Friends of Israel Gospel Ministry. He ministers to the Las Vegas Jewish community by building relationships through volunteer work with various pro-Israel/Jewish organizations, a Bible study with rabbis, and care for Holocaust survivors. Ty also speaks in churches and at Christian colleges about Israel and the Jewish people. Ty resides in the Las Vegas area with his wife, Lissy, and their two children. You can support Ty's ministry online here.