I remember the day well, when a confused man approached our FOI literature table at a prophecy conference we were invited to, and point blank asked me, “How can you believe any of this?”

He then began pointing to all the different book tables set up by the different ministries and proceeded to tell me what he was struggling with. You see, even though he had not read the books represented, he assumed we all had major differences of opinions regarding the end times (eschatology). In his mind, how could anyone believe any of it?

After several minutes of discussion, I realized that he had for years been studying different authors who were not dispensationalists. Instead he had fallen for the teachings of those whose hermeneutic (method of interpreting the Bible) was not to interpret the Bible in a literal, grammatical, historical way. But rather their approach was to look at the Bible in an allegorical and spiritual way. No wonder this man was so confused, as that method of interpretation leads to nothing more than confusion, especially in regard to eschatology.

If used consistently, allegorical hermeneutics would reduce the Bible to near-fiction.

Charles Ryrie in his book Basic Theology says it well:

It is amazing that so many Christians who interpret God’s Word literally concerning Jesus’ First Coming now shift gears in the way they read their Bibles concerning events linked to His Second Coming. Such was the case with a former pastor who would expositionally preach a good sermon until he came to Bible prophecy. Because for him, modern-day Israel meant nothing. There was no Rapture, no literal Tribulation Period, Jesus was not coming back literally with two feet planted on the Mount of Olives and thus no literal 1,000-year Kingdom. Where does it end? How do you decide what to take literally and what not to?

If I had taken God’s Word that way before I was saved, I would have never come to know Jesus as my personal Lord and Savior, because the Bible always could have meant something other than what it really said. Yet God tells us in His Word:

Behold, the former things have come to pass, and new things I declare; before they spring forth I tell you of them.

For the testimony of Jesus is the spirit of prophecy.

You see, it is God alone who predicts the future. Prophecy is one of God’s signatures that tells us that we can trust in Him and His Word. It is what separates the Bible from all other religious writings in the world. But if we consistently use allegorical hermeneutics as Charles Ryrie points out, then in effect what we have just done is reduce the Bible to nothing more than a work of fiction. How tragic!

With hermeneutics like that, it is no wonder so many people want nothing to do with Bible prophecy. It is no wonder pastors refuse to preach and teach events concerning the future and it is no wonder it can be so hard to understand.

Our approach when reading God’s Word should be, When the plain sense is common sense, seek no other sense.

Instead, our approach when reading God’s Word should be, When the plain sense is common sense, seek no other sense. In other words, read God’s Word and believe what He has written without looking for some hidden meaning. Also, get some help from authors whose hermeneutic is to read and interpret God’s Word in a literal, grammatical, historical way. Here at The Friends of Israel Gospel Ministry, we have many resources from a variety of different authors to help you in your study of God’s Word. 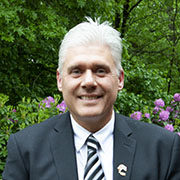 Robert is located in Regina, Saskatchewan and is the Canadian Director of FOI Gospel Ministry Inc. You can support his ministry online HERE.