As we count down to Christmas Day, many of us read Scripture that speaks of the Messiah’s birth. The Old Testament has many wonderful prophecies that detailed His coming hundreds of years before His birth. The challenge we often face in reading prophecy today is that these words were spoken to a different people group in a different culture in a different time—more than 2,500 years ago. So what did Isaiah’s prophecy in Isaiah 7 mean to the Israelites of his day?

About 734 years before Jesus was born, the political situation in Israel was ugly. In the northern kingdom of Israel, King Pekah ruled with an evil heart. But Tiglath-Pileser II, king of Assyria, wanted to conquer all the way to Egypt, including the kingdoms of Syria, Israel, and Judah. So King Pekah joined forces with Syrian King Rezin, who wasn’t a friend of Israel, so they could face Assyria’s threat. They came to Ahaz, king of Judah in the south, to make a pact, but Ahaz didn’t trust them. But instead of calling on God, he called on the Assyrian king and promised to bring him his treasures and open Judah’s borders if he would spare the southern kingdom.

This didn’t sit well with God. He sent Isaiah to warn Ahaz about the consequences of failing to trust in Him. Isaiah came with his son, Shear-Jashub, to tell Ahaz to trust in God, not King Tiglath-Pileser II. Ahaz brought Isaiah to the end of the water conduit of the upper pool for two reasons. First, they could see Judah’s enemies from that vantage point. Second, Ahaz wanted to see how much water he had left to determine how long his city could remain under Assyrian siege before opening the gates.

This decision again showed Ahaz’s lack of faith. He didn’t cry out to God; he just checked his own resources, hoping to trust in his own strength rather than God’s. So God again sent Isaiah to meet Ahaz at the conduit, the gravesite of Ahaz’s faith, to say, “You came to check your water supply, but I came to remind you that you have a great God.”

Isaiah’s son, whom God told the prophet to bring, is greatly important in this account. Each of Isaiah’s sons had names that symbolized what God would do in Israel’s future. One of his sons was named Maher-Shalal-Hash-Baz, which means “spoil quickly, plunder speedily,” or “the enemies are going to come quick and take all our food!” But the son he brought to Ahaz was named Shear-Jashub, meaning “a remnant shall return.” The boy’s name was key to Isaiah’s message to Ahaz. He told him that there would soon be dark days of dispersion for Israel, but a remnant would return because this isn’t the end.

When you rely on God and measure your problems against His power, He can help you overcome every struggle.

Ahaz’s struggle was that he could only see his problems. Though Isaiah told him to prepare for war and to rely on God, not on the king of Assyria, the kings and armies coming to attack Ahaz’s land were terrifying conquerors in his mind. But to God they were only smoldering fires.

When I was a kid, I would play a game with matches. I would light one match and hold it until it burned down far enough to make my finger hot, then I would grab it on the other side since it had gone cold, holding it until it fully burned out. That’s what these kings were like! They would soon be worthless after they burned out, but only God could see that. Where Ahaz saw only problems, God saw clarity in the big picture. He knew King Pekah and King Rezin would be cast down just two years later, but Ahaz could only see the problems in front of him.

We can learn from this lesson today. When you look at reality and measure your own strength against your problems, it’s impossible to win. But when you rely on God and measure them against His power, He can help you overcome every struggle. If God sends you into a circumstance with His promise and power, you’ll never have any reason to fear.

Going back to Isaiah and Ahaz, we see that King Pekah and King Rezin wanted to dethrone Ahaz and put a puppet king in his place to control Judah. God wouldn’t allow this to happen—not because Ahaz deserved His help but because he was a link in the chain of the House of David, which ultimately led to the birth of the Messiah.

God in His mercy remained faithful to His promise to Adam, Abraham, and David because He loves us and wants to save us.

Isaiah knew the northern kingdom would not survive much longer because God had revealed it to him. Sure enough, Babylon took the northern kingdom into captivity 65 years later, and they came to live in the land, eventually becoming known as the Samaritans. But this wasn’t much consolation to Ahaz. He was staring death in the face at that same moment and couldn’t wait 65 years for deliverance. It’s like if a child says, “Mom, I’m hungry,” and the mom responds, “Don’t worry, I’ll give you a sandwich in two years!”

But sure enough, God promised that with every trial, He’ll provide us strength to endure the trial. He wasn’t asking Ahaz to do something impossible. In fact, in verse 10, He told Ahaz to ask for any sign he wanted from God. But Ahaz, in his pride and self-righteousness, said, “I will not ask, nor will I test the Lᴏʀᴅ!” (v. 11).This made God angry. Yet God in His mercy remained faithful to His promise to Adam, Abraham, and David because He loves us and wants to save us. So He gave Ahaz the sign of salvation: the virgin birth of Immanuel.

The Hebrew word for “virgin” described a young woman who is not married or had sexual relations yet. That word was translated into Greek as “virgin,” so the context was never lost in translation. The same word is used to describe Rebekah in Genesis 24, being called a young woman and a virgin. The word can be taken literally. This means the virgin’s child is miraculous since it must have been a miracle from God that allowed this to happen.

But do you think Ahaz would stop worrying when Isaiah told him, “Don’t worry about the Assyrians; I’ll give you a baby to trust in for victory”? No! But the Gospels are clear: The virgin is Mary, Immanuel is Jesus, and salvation is found in Jesus alone. Isaiah shared these details to make it clear that Jesus is God.

Though rabbis don’t misinterpret all of Scripture, they seem to get this one wrong consistently. When the famous Rabbi Rashi took the Messiah out of this prophecy and put historical events in it, he did it purposely, essentially saying, “I give you this new interpretation so you can answer Gentiles when they argue with you.” Rabbi Radak, also known as David Kimchi, interpreted Isaiah 7:14–15 by saying, “It’s not like the Christians say. Immanuel will simply be a regular child who loves to eat butter and honey [in reference to verse 15 saying He will eat curds and honey].”

But verses 19–20 provide a better interpretation. Difficult times will come on the people of Israel. Families may have just one cow left to provide milk and butter. People will need to scavenge in the land, hoping to find honey in the honeycombs. So this reference to eating butter (curds) and honey indicates a time of poverty, not wealth.

In Matthew 1 this prophecy is fulfilled through Mary in the birth of Jesus, Immanuel—God in human flesh. Through His birth, Immanuel is a descendant of David and the Seed of the woman in Genesis 3:15.

Through His birth, Immanuel is a descendant of David and the Seed of the woman in Genesis 3:15.

But this meant little to Ahaz as he faced immediate danger. He was looking for a short-term prophecy that would give him peace. Isaiah did give him a hopeful short-term prophecy—just not the one he wanted to hear (Isaiah 7:16–17). He told Ahaz that before the child would know to refuse evil and choose good, the land whose rulers he feared would be forsaken and King Pekah and King Rezin would be gone. I believe the boy he was talking about was his son Shear-Jashub, meaning this would happen imminently, before this boy would even grow old enough to discern good from evil.

So what does his prophecy teach us? First, the prophecy of the virgin birth was fulfilled in Jesus and only Jesus. We can be saved and have peace only through Immanuel. Second, the Messiah is Immanuel, Jesus, the Seed of the woman in Genesis 3:15, the One who would crush the serpent’s head. Isaiah and God told Ahaz to look to Immanuel. Rabbis today tell their students to look to Isaiah’s son. We must follow the Word of God to avoid false teaching. His Word will lead you to life; the word of people will lead you to death.

Who is Immanuel to you? The son of the prophet, or Jesus? Believe today that God sent His Son to save us from our sins. Celebrate that truth now at Christmas, knowing His birth, life, death, and resurrection made our redemption possible. 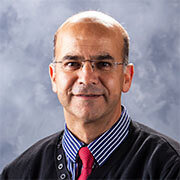 Meno Kalisher is a field director for The Friends of Israel Gospel Ministry in Jerusalem, Israel.