As Christians, we always want to be good students and stewards of God’s Word. We never want to gloss over parts of Scripture just because they’re hard for us to understand or because we’re afraid they might damage our theology. Parables often challenge us in our Bible studies because their meanings aren’t as immediately understood as topics like narrative accounts of Jesus’ life or doctrinal teachings in Paul’s epistles. This often leads to controversy among believers trying to determine what Jesus meant to teach.

The Audience: Israel or Its Leaders?

Jesus uses this story to illustrate the fact that the nation of Israel, especially its leaders, had rejected the prophets and even killed some of them. They would also kill Jesus who is the Messiah and the Son of God. There would be severe judgment (v. 44). In fact, Jesus clearly says those being judged would have the Kingdom of God taken from them; that is, they would not be part of God’s coming Kingdom.

The text says in verse 45 that the chief priests and Pharisees finally understood that, in His parables, Jesus was talking about them. This leads some interpreters to suggest it is only the leaders of Israel who will not experience the Kingdom. However, the whole parable seems to see the leaders as representative of the entire nation of Israel, although we know that some Jewish people believed in Jesus and will be part of God’s Kingdom. Some might conclude it is that particular generation of Jewish people, the first-century nation, that on the whole would not see the Kingdom when it comes.

The Nation: Israel or the Church?

The real difficulty in the verse is Jesus’ statement that the Kingdom would be taken away from those being judged and “given to a nation bearing the fruits of it” (that is, fruits of the Kingdom). Who is the nation being referenced in Jesus’ words?

Those who hold to Replacement Theology teach that this passage says that the nation of Israel has been rejected by God, the Jews are no longer God’s Chosen People, and there is no future for national Israel. The nation which the Kingdom is going to be given to is the church, the spiritual and new Israel. Individual Jewish people may enter into God’s coming Kingdom through their faith in Jesus as they become part of the church.

To hold to the idea that the church replaces Israel cancels so many of the promises which God gave to the Jewish people in the prophets and throughout the rest of the Old Testament.

Dispensationalists reject the idea that Israel has no national future. To hold to the idea that the church replaces Israel cancels so many of the promises which God gave to the Jewish people in the prophets and throughout the rest of the Old Testament. God does not go back on those promises (Romans 11:29). Thus, the view of Replacement Theology should be rejected. However, dispensationalists disagree among themselves over how to interpret the word nation in Matthew 21:43. Some see the term as somewhat indefinite, referring to those who would put their faith in Christ.

A much larger number of dispensationalists, perhaps a majority, see the nation of Matthew 21:43 as designating the generation of Israel that will come through the future Tribulation period and then inherit the Kingdom. It is also possible to include all past Jewish believers who will be raised from the dead at the end of the Tribulation (Daniel 12:1–2). There are several positive features of this view. First, this position correctly rejects Replacement Theology and honors the Old Testament promises to the nation of Israel and the Jewish people. There is no casting out of the nation of Israel forever. Second, the term nation would carry its normal meaning. The nation that is removed from blessing in the first century and the nation that is the future recipient of blessing is always the nation of Israel. The normal meaning of the term nation can be held. Third, later passages in Matthew such as the Olivet Discourse continue to speak to the future of Israel and the Jewish generation that will be living during the Tribulation. Consequently, many dispensationalists opt for this understanding of the word nation in Matthew 21:43. In light of such evidence, this view should be respected.

Another view held by a large number of dispensationalists is that the nation in the verse does refer to the church. This view can be found in the Ryrie Study Bible. However, naturally such dispensationalists would reject Replacement Theology and not see this position as endorsing Supersessionism. In reaction to some dispensationalists who say the church is never called a nation, those holding this view point to passages where this is in fact the case. For example, in 1 Peter 2:9–10, the apostle describes the church as a holy nation. Replacement theologians use such verses to assert theologically that the church has become the nation that has replaced the Jewish nation in God’s plan. However, dispensationalists understand such verses in an analogous way. It is quite easy to see Jewish believers like Peter use Old Testament pictures to depict the church. But an analogy does not do away with the distinction of Israel and the church, and neither does it cancel the promises to Israel throughout the Bible. Furthermore, this understanding is still within the realm of literal, grammatical, historical interpretation.

An analogy does not do away with the distinction of Israel and the church, and neither does it cancel the promises to Israel throughout the Bible.

I lean toward the dispensational approach that sees the nation in Matthew 21:43 as the church (agreeing with the Ryrie Study Bible) for another significant reason as well. This view fits the overall thrust of the argument of Matthew—the transition from the Israel mission to the Gentile mission in anticipation of the church that will begin on the day of Pentecost. In Matthew 12, there is a major rejection of Christ by the Pharisees as they accuse Him of doing His miracles by the power of the devil. In Matthew 13, Jesus gives some Kingdom parables alerting the disciples that there was coming an unexpected time during which a great influx of others, including mostly Gentiles, would come to the Lord before the Kingdom comes.

As early as chapter 8, Jesus had healed a Roman centurion’s servant. He then surprised the crowd of Jewish people with the words “many (Gentiles) will come from east and west, and sit down with Abraham, Isaac, and Jacob in the kingdom of heaven” (8:11). At the same time, He shocks the audience by saying, “the sons of the kingdom will be cast into outer darkness” (8:12). Jesus is being sarcastic by using this label. The sons of the Kingdom here are the Jews who thought they would be in the Kingdom but will miss it because they rejected the Messiah when He came. He is saying that some Jews will not be saved but many Gentiles will be in the coming Kingdom. Then in chapter 10, Christ sends out His disciples to go only to the house of Israel (10:6). But by the end of the book, the disciples are told to go to all nations in the Great Commission (28:19–20). This anticipates the start of the church (16:18; 18:17). It is in this overarching context that Jesus tells the Pharisees in Matthew 21:43 that the Kingdom is going to be taken from them and given to another nation. 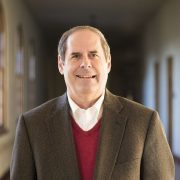 Mike is the Vice President of International Ministries for The Friends of Israel Gospel Ministry.