“Shema Yisrael Adonai eloheinu Adonai ehad”—“Hear, O Israel, the Lᴏʀᴅ is our God, the Lᴏʀᴅ is One” (Deuteronomy 6:4).

To this day within Judaism, the Shema is recited as a prayer and a declaration of faith in one God. This ritual does not necessarily always stem from a devoted, submissive, faithful heart, though. Sometimes, a ritual is just a ritual. It’s just tradition. Sadly, for many, this prayer is habitually recited from lips belonging to a disengaged heart. However, those who truly love the Lord their God with all their heart, mind, soul, and strength will obey Him and will not go after other gods when their faith in Him becomes inconvenient.

When we read the Old Testament, we can grow weary of the repeated return of God’s Chosen People to idolatry. Again and again, Israel’s heart worshiped lesser things. But 1 Corinthians 10:1–22 reminds us that Israel’s spiritual adultery was recorded for our benefit. We must recognize our own heart’s inclination towards idolatry and flee that temptation (v.14).

We must recognize our own heart’s inclination towards idolatry and flee that temptation.

Fear seems to play a key role in the human propensity to run after idols instead of bowing the knee to the Lord. For example, when the land allotments were made for the tribes of Israel, the tribe of Dan was allotted a strip of the Mediterranean coastal plain where Joppa is located. Beautiful location, but terrible neighbors… remember the Philistines? So instead of facing their fears and taking the land God had promised them, they decided to settle all the way up to the northernmost border, conquered Leshem (Laish), and renamed it “Dan” (Joshua 19:40–48; Judges 18). Real imaginative, weren’t they? In those days, “from Dan to Beersheva” became the catchphrase for the land of Israel from north to south.

With Solomon’s Temple being built in the city of Jerusalem, the Ark of the Covenant came to rest in the holy of holies there. Unfortunately, Solomon did not remain faithful to the Lord and allowed the most heinous idolatry to be practiced in the land. In light of Solomon’s terrible leadership into idolatry, a servant who had grown up in Solomon’s palace received an amazing opportunity. His name: Jeroboam—not to be confused with Solomon’s son, Rehoboam.

Rehoboam took the throne in Jerusalem after his father, but God tore the 10 northern tribes of Israel from Solomon’s house and gave them to Jeroboam to rule over with the potential for “a sure house, as I built for David” (1 Kings 11:38). God would still keep His covenant with David, but this was to afflict David’s descendants so that they might learn that God is a jealous God, and idolatry is never the answer. Jeroboam had so much potential for true greatness in this moment! What would he do with this great opportunity?

As He said He would, God divided the rule of His people into the northern kingdom, Israel, ruled by Jeroboam, and the southern kingdom, Judah, ruled by Rehoboam (1 Kings 12:1–24). This was it! This was Jeroboam’s chance at greatness! A true Cinderella story—from servant to king!

As Jeroboam built Shechem and Peniel, he started thinking about how the children of Israel were commanded by God to travel to Jerusalem’s Temple for sacrifice every year. Suddenly, he got a case of the “what-ifs.” “What if the people go to Jerusalem? What if they decide they like Rehoboam better? What if they revolt against me? I can’t let that happen!”

Jeroboam’s fear motivated him to seek advice, which in and of itself, is not a bad idea. Scripture says there is safety in a multitude of counselors (Proverbs 11:14). Of course, Solomon wrote that, so maybe Jeroboam might have been privy to that piece of wisdom. The problem is that it does not appear that Jeroboam brought his fear to the Lord or asked for direction from the One who gave him this kingdom in the first place.

Jeroboam ended up getting some terrible advice (1 Kings 12:28–30). He made two golden calves and set one in Bethel and one in Dan. “How convenient! You at the northern border don’t need to make the long trek down south! Here are the gods that delivered you from Egypt! You can worship them from the comfort of your own home. Here you go!” But when has setting up a golden calf ever boded well for the Israelites? Never!

God Is Jealous for His People

When you read this historical account of wicked king after wicked king, do you also see the longsuffering, patient, merciful, and just nature of an omnipotent God who is jealous for the love of His Chosen People?

It’s not enough for us to sit here and point our fingers at ancient Israel, though. When you read this historical account of wicked king after wicked king, do you also see the longsuffering, patient, merciful, and just nature of an omnipotent God who is jealous for the love of His Chosen People? Do you see how He faithfully sent His prophets with words of His desire for His people? Do you see how He faithfully judged His people and warned them of the horrors of idolatry, including sacrificing their own children into the arms of the pagan god Molech?

The altar of convenience always takes more than it gives. Why would anyone choose idolatry over God? Yet, if we were honest with ourselves, fear also drives us to our own brand of idolatry. I, too, am guilty of making sacrifices on the “altar of convenience.” God is indeed a jealous God, and we would do well to remember that the next time fear suggests an alternative. 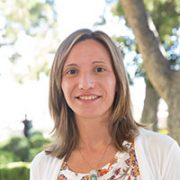 Becky is a Field Ministry Representative in Las Vegas, Nevada. You can support her ministry online here.