Here in Werribee, southwest of Melbourne, Victoria, in Australia, a few families of turtle doves have made our backyard their home. From my office window I hear and see them cooing and flapping their wings here in the summer.

An interesting part of the dove’s anatomy is its tail feathers. Fanned out and then gathered together where they join the body, these feathers allow the birds to skillfully steer their way through the air.

The way God dovetails the events of our own lives amazes me. Like the dove’s tail feathers, He brings together changes and even disappointments and obstacles to achieve His sovereign purpose. As I think back on my work for 19 years as a church army evangelist followed by 17 years in aged care as a recreation officer and chaplain and as a local church pastor, I see how God has dovetailed events, people, situations, and hardships to create opportunities for ministry. My music, playing guitar and singing, factored into each of these areas of ministry.

Like the dove’s tail feathers, He brings together changes and even disappointments and obstacles to achieve His sovereign purpose.

I remember thinking of each closure as a disappointment. But really, it was His appointment! In 2014, when my ministry as a pastor and as an aged care chaplain came to a close, I was disheartened. But the Lord had a purpose, unseen by me, in all that He was bringing to pass. It was then that a door opened with The Friends of Israel (FOI). God dovetailed my aged care, musical, pastoral, preaching, and evangelistic gifts into my work amongst the elderly Jewish people in Melbourne and preaching and teaching around churches.

When my wife, Kathy, and I began ministering with FOI, we were still living in Newcastle, New South Wales. I contacted Montefiore Jewish Aged Care Home in Sydney, two hours away, offering my services with music programs. They welcomed me with open arms.

When we relocated south to serve with FOI in Melbourne, Victoria, in 2016, I contacted two Jewish aged care facilities in the city. I’ll never forget how, after I shared my experience, Tamara, one of the resident lifestyle coordinators, excitedly asked, “When can you come?”

Over the following four years God allowed me to establish wonderful, firm friendships with the residents, their families, and staff. Some of the residents are Holocaust survivors, and I’ve shed many tears with these precious people as they have recounted their stories of suffering, loss, and survival in the concentration camps during the Holocaust.

At one point I was conducting eight sessions per week at four homes. God had opened the door to be regularly involved in the recreation programs of six Jewish aged care facilities in Melbourne.

Even though we ultimately became hampered by the world’s most extensive COVID lockdowns and restrictions over more than two years, my music programs continued via online Zoom video sessions. In spite of technical problems, we persisted!

Now it looks like the fog is lifting slightly, and I will be permitted to return to one of the Jewish care homes in person! I have missed this personal contact with my elderly friends so much. I look forward to the time when COVID is no longer a factor in ministry here.

The depth of friendship and respect we share with our Jewish friends has greatly encouraged us. Sometimes I have been called upon to perform impromptu concerts with the Jewish homes. Having a repertoire of Jewish standard songs has helped equip me to accept these requests.

Simply showing respect by listening to their stories and meeting their families goes a long way toward building bridges of friendships.

Each Jewish aged care facility has a resident rabbi who cares for the spiritual well-being of the residents. I have formed positive relationships with the rabbis at each home, some of whom have even joined in the music by singing and dancing!

We have contingencies of Yiddish-, Polish-, and Russian-speaking Jews. There is an occasional Hebrew-speaker. However, they enjoy the various songs I sing in different languages. At the beginning of my work with FOI, I listened to Jewish songs in various languages and worked hard to absorb the accents of each language. This has been helpful in representing each song faithfully. Though I receive compliments on my language skills, my understanding of the languages is sometimes vague; but thankfully my accent passes the test!

Simply showing respect by listening to their stories and meeting their families goes a long way toward building bridges of friendships.

A few years ago I met with a group of believers involved in Jewish ministry at a conference. Each of us was asked to speak about our ministry with the Jewish community. When I shared about my work and the way in which ministry had opened up in the aged care homes, the others were amazed that I was afforded such opportunities there. I have been told by the staff that some Christian groups go into the facilities with the sole aim of “evangelizing residents.” They then wonder why they are not invited to return. When we go to these places, we realize we are “on their turf”; and respect must be earned, not assumed.

All these factors have dovetailed into a ministry that is a great encouragement and a blessing to the Jewish community here. Every now and then a resident or a family member will ask me, “Why do you come all the way from the other side of the city to do this?” I simply tell them, “Because the Lord Jesus sent me here. He loves you.” And often they will say, “Oh yes, that’s right. He was Jewish, too, wasn’t He?”

The door is opening ever so cautiously into their lives. Please pray that the year ahead will see this continue and grow. 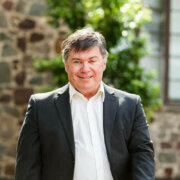 Mark Rogers is a Field Representative for The Friends of Israel Gospel Ministry in Victoria, Australia.