The first time I met Dr. John C. Whitcomb,1 he made me feel like I was greeting an old friend.

You see, Dr. Whitcomb loved people. He had a heart for—a genuine interest in—everyone that he met, including every student in his classroom. 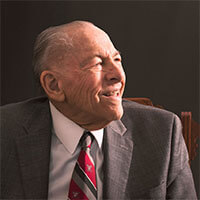 The classroom where we connected on that warm September day was commonly used for seminary classes and chapel at Faith Baptist Theological Seminary in Ankeny, Iowa. The course was called “Biblical Fundamentalism.”

But it was the teacher, not the subject, that first caught my attention in the spring of 1994 when my wife Lynnette and I began to consider the possibility of heading off to seminary the following fall.

I had heard about Dr. Whitcomb and was intrigued by his teaching—although the only things that were readily available to me in those days were his books. He had been highly regarded by my former pastor and some previous professors, and I knew he—having already enjoyed the status of a Founding Father of the modern biblical creation movement for more than 30 years before I met him—represented all that I aspired to become. God used his commitment to teach a modular course at Faith that fall to draw me providentially to that seminary.

When the time finally arrived for his one-week course to begin, I quickly sensed that I was studying under a master. As Dr. Whitcomb thumbed through his Bible to reference various verses, it often felt as though I was seeing in 3-D that which I had previously known only as a flat picture.

His perception of the meaning of the text was never rooted in mere opinion or speculation. Rather, he arrived at his conclusions by thinking deeply about the context, rooted in the original languages—and often to an extent that others had not considered.

What made Dr. Whitcomb’s teaching so outstanding was, first, his powerful gift for communicating. He coupled this with his deep insight into the text of Scripture. His perception of the meaning of the text was never rooted in mere opinion or speculation. Rather, he arrived at his conclusions by thinking deeply about the context, rooted in the original languages—and often to an extent that others had not considered. It was a fascination with such thoroughness of thought that fueled the intense interest of many hundreds of the students that he has taught through the past seven decades.2

Incidentally, Dr. Whitcomb had a name for the conclusions that he drew in this way—valid theological inferences. These were concepts that—although not stated explicitly in any one verse of the Bible—have to be true, based on other, clearer Biblical teachings. Being true, they help us to fill out the picture that Scripture presents on any number of topics.

I would ultimately complete 10 courses under Dr. Whitcomb at Faith, including classes on Exodus, Ezra, Esther, Daniel and Isaiah, along with creationism,3 apologetics, and the history of Israel. I can honestly say that I cherished every minute of those classes. The copious notes that I took bear witness to that claim. They are invaluable to me.

The most profound meeting I ever had with Dr. John C. Whitcomb may have taken place in the Faith Bookstore in September of 1998.

As I was nearing the end of seminary, and also celebrating my 30th birthday, I wanted to get a new Bible which I could fill systematically with highlighting and handwritten notes. Several of my professors—Dr. Whitcomb being foremost among them—possessed such Bibles, and had written their notes in such a fashion that they could preach and teach without referencing any others papers—just the Bibles they held in their hands.

As you might expect, there was a story behind Dr. Whitcomb’s New American Standard Ryrie Study Bible. It was a blue leather edition, with a special engraving on the end sheet, noting that it was a personal gift to him by Dr. Charles Ryrie back when his study Bible was first released.

I was always fascinated with that Bible. Parts of it are now virtually disintegrated, and at one time a page from the early chapters of Genesis was completely torn out. Still, you got the distinct impression that Dr. Whitcomb could take that Bible, without any other notes, and get by just fine in teaching a week-long college or seminary module. Indeed, he had done so, for all practical purposes, numerous times in various sectors of the globe.

I had determined, in filling a Bible of my own with notes, to stick to the New King James Version. Evaluating the available options at the time, I chose to spend my birthday money on a Thompson Chain-Reference Study Bible—the same Bible that I still preach and teach from today. I sometimes joked to Dr. Whitcomb that my edition is uniquely the “Whitcomb Study Bible.”

Providentially, Dr. Whitcomb was at the bookstore counter buying some books when I was ready to make my purchase. Not only that, he saw what I was buying and gave his nodding approval. He even gave me a command to “learn everything that’s in there.” 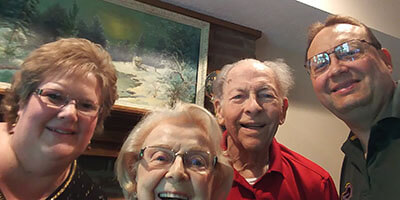 The last time I saw Dr. John C. Whitcomb was in July of 2018—on the day before The Friends of Israel Gospel Ministry’s National Prophecy Conference, which is held each year in his old stomping grounds, on the campus of Grace College and Seminary in Winona Lake, Indiana (Lynnette and I were, at that time, still learning all that we could about the Friends of Israel, prior to our appointment to service at the November 2018 FOI board meeting).

He regularly prayed for Christian workers at mealtimes, and the importance of Israel and those who ministered to the Jewish people was never far from his mind.

Dr. Whitcomb loved The Friends of Israel! Issues of Israel My Glory were ubiquitous around his famously disheveled desk. He regularly prayed for Christian workers at mealtimes, and the importance of Israel and those who ministered to the Jewish people was never far from his mind.

As we left him and his dear wife Norma on that warm Saturday afternoon, he had already retired to his desk where he was studying and marking up some kind of theological paper. It appeared almost as if he were getting ready to teach a class on Monday morning. The picture of him sitting there, studying quietly, is forever frozen in my mind.

“I think my God upon every remembrance of” Dr. John C. Whitcomb (Phil. 1:3). My life was impacted by his teaching and example to such a degree that I cannot imagine who I would be apart from it. 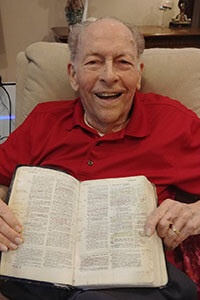 Dr. Whitcomb entered into his full enjoyment of “the general assembly and church of the firstborn who are registered in heaven” (Heb. 12:23) on the morning of Wednesday, February 5, 2020, at 95 years of age.

He leaves behind a spiritual legacy of unfathomable proportions. If he could call to us from glory now, he would remind us of the program that we are responsible to execute in regard to it: “The things that you have heard from me among many witnesses, commit these to faithful men who will be able to teach others also” (2 Tim. 2:2).4

I’m still working on that course assignment, also, as well as one more:

“Remember those who rule over you, who have spoken the word of God to you, whose faith follow, considering the outcome of their conduct” (Heb. 13:7).

1 I have had the unique opportunity and privilege of serving as a ministry assistant to Dr. John Whitcomb and Whitcomb Ministries since 2003. In addition, I compiled his biography for a magazine article (“John C. Whitcomb: Hero of the Faith.” Gospel Herald and The Sunday School Times Vol. 23, No. 4. [Fall 2005]: 12-13.) and his biography and bibliography for a chapter in a book which was written in his honor (“A Biographical Tribute to Dr. John C. Whitcomb Jr.” In Coming to Grips with Genesis: Biblical Authority and the Age of the Earth, eds. Terry Mortenson and Thane Ury, 437-451. Green Forest, AR: Master Books, 2008.). I also utilized my connection to Dr. Whitcomb to write articles about his “spiritual father”—the man who led him to Christ at Princeton University—Dr. Donald B. Fullerton (“Dr. Donald B. Fullerton: A Vital Witness at Princeton.” Gospel Herald and The Sunday School Times Vol. 31, No. 2. [Spring 2013]: 28.); his theological mentor, Dr. Alva J. McClain, and his classic theology book called The Greatness of the Kingdom (“McClain’s Masterpiece.” Gospel Herald and The Sunday School Times Vol. 24, No. 3. [Summer 2006]: 49.); and one of his lesser-known, though highly-valued, colleagues at Grace Theological Seminary (“Dr. John Sproule: Theological Scholar and Mentor.” Gospel Herald and The Sunday School Times Vol. 36, No. 2. [Spring 2018]: 28.).
2 Dr. Whitcomb taught at Grace Theological Seminary in Winona Lake, Ind., from 1951 to 1990.
3 The Genesis Flood, which was published in 1961 by Presbyterian and Reformed Publishing Co., has been widely credited as the book that began the modern biblical and scientific creationism movement. Many key leaders of this movement were personally affected by reading the book, and it is not an exaggeration to say that it influenced the entire evangelical world toward Young-Earth Creation in six literal days of time. I wrote the following article in preparation for the celebration of the 50th anniversary of the book, in 2011: “The Genesis Flood: Tidal Wave of Change.” Baptist Bulletin Vol. 76, No. 4. (July/August 2010): 16-19. Incidentally, the book turned 59 years old this Tuesday, Feb. 11, 2020.
4 Dr. Whitcomb regarded 2 Timothy 2:2 as his life verse and understood it to be a restatement of the Great Commission—explaining specifically the church’s mission for this church age, while simultaneously giving a strategy for obeying that mission. He developed this model of thinking at length in several of his classes and popular teaching series.